There was a $5 million reward on his head under the US "Rewards for Justice" program. 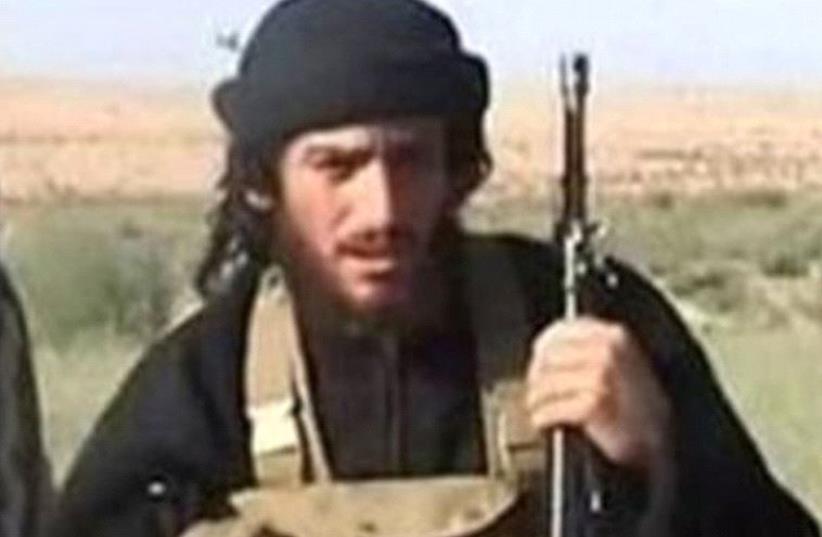 IS spokesman and head of external operations Abu Muhammad al-Adnani
(photo credit: US STATE DEPARTMENT/ REUTERS)
Advertisement
BEIRUT/WASHINGTON, Aug 30 (Reuters) - Islamic State said on Tuesday one of its most prominent and longest-serving leaders was killed in what appeared to be an American air strike in Syria, depriving the militant group of the man in charge of directing attacks overseas.A US defense official told Reuters the United States targeted Abu Muhammad al-Adnani in a Tuesday strike on a vehicle traveling in the Syrian town of al-Bab. The official stopped short of confirming Adnani's death, however.Such US assessments often take days and often lag behind official announcements by militant groups.Adnani was one of the last living senior members, along with self-appointed caliph Abu Bakr al-Baghdadi, who founded the group and stunned the Middle East by seizing huge tracts of Iraq and Syria in 2014.As Islamic State's spokesman, Adnani was its most visible member. As head of external operations, he was in charge of attacks overseas, including Europe, that have become an increasingly important tactic for the group as its core Iraqi and Syrian territory has been eroded by military losses.The group reacted by saying his death would not harm it, and his killers would face "torment", a statement in the group's al-Naba newspaper said, according to the Site Intelligence monitoring group."Today, they rejoice for the killing ... and then they will cry much when Allah will overpower them, with His permission, with affliction of the worst torment by the soldiers of Abu Muhammad and his brothers," the statement said.Advances by Iraq's army and allied militia towards Islamic State's most important possession of Mosul have put the group under new pressure at a moment when a US-backed coalition has cut its Syrian holdings off from the Turkish border.Those military setbacks have been accompanied by air strikes that have killed several of the group's leaders, undermining its organisational ability and dampening its morale.A US counter-terrorism official who monitors Islamic State said Adnani's death would hurt the militants "in the area that increasingly concerns us as the group loses more and more of its caliphate and its financial base ... and turns to mounting and inspiring more attacks in Europe, Southeast Asia and elsewhere".Under Adnani's auspices, Islamic State launched large-scale attacks, bombings and shootings on civilians in countries outside its core area, including France, Belgium and Turkey.The official said Adnani's roles as propaganda chief and director of external operations had become "indistinguishable" because the group uses its online messages to recruit fighters and provide instruction and inspiration for attacks.Islamic State's Amaq News Agency reported that Adnani was killed "while surveying the operations to repel the military campaigns against Aleppo." Islamic State holds territory in the province of Aleppo, but not in the city where rebels are fighting Syrian government forces.Amaq did not say how Adnani, born Taha Subhi Falaha in Syria's Idlib Province in 1977, was killed. Islamic State published a eulogy dated Aug. 29 but gave no further details.INROADS INTO ISLAMIC STATEAdnani was a Syrian from Binish in Idlib, southwest of Aleppo, who pledged allegiance to Islamic State's predecessor, al Qaeda, more than a decade ago and was once imprisoned by US forces in Iraq, according to the Brookings Institution.He was from a well-to-do background but left Syria to travel to Iraq to fight US forces there after its 2003 invasion, and only returned to his homeland after the start of its own civil war in 2011, a person who knew his family said.He once taught theology and law in jihadi training camps, according to Brookings. A biography posted on militant websites says he grew up with a "love of mosques" and was a prolific reader.He had been the chief propagandist for the ultra-hardline jihadist group since he declared in a June 2014 statement that it was establishing a modern-day caliphate spanning swaths of territory it had seized in Iraq and neighbouring Syria.Adnani had often been the face of the Sunni militant group, such as when he issued a message in May urging attacks on the United States and Europe during the holy month of Ramadan, and as in Sept. 2014 when he called on supporters to kill Westerners throughout the world.Recent advances by the US-backed Syrian Democratic Forces, an alliance of Kurdish and Arab militias, and by Syrian rebels backed by Turkey, have made inroads into Islamic State holdings in Aleppo province, cutting them off from the Turkish border and supply lines along it.Iraqi army advances against the jihadist group meant Baghdad was on track to retake Mosul by the end of this year, the head of the US military's Central Command General Joseph Votel said on Tuesday.AIR STRIKEAmong senior Islamic State officials killed in air strikes this year are Abu Ali al-Anbari, Baghdadi's formal deputy, and the group's "minister of war", Abu Omar al-Shishani. Adnani had joined the group under its founder Abu Musab al-Zarqawi.There were conflicting reports earlier on Tuesday as to where and how Adnani died.A senior Syrian rebel official said Adnani was most probably killed in the Islamic State-held city of al-Bab in an air strike. Citing unconfirmed reports, he said Adnani was in the Aleppo region to raise morale in the face of mounting pressure.Islamic State's territory around Aleppo is of particular significance to the group because it is also the location of Dabiq, where an Islamic prophecy holds the last battle between Muslims and infidels will rage, heralding the end of time.Iraq said in January that Adnani had been wounded in an air strike in the western province of Anbar and then moved to the northern city of Mosul, Islamic State's capital in Iraq.The United States designated him a "global terrorist" this year and said he was one of the first foreign fighters to oppose US-led coalition forces in Iraq since 2003 before becoming spokesman of the militant group.There was a $5 million reward on his head under the US "Rewards for Justice" program.