Kurdistan confronts Islamic State and the prospect of independence 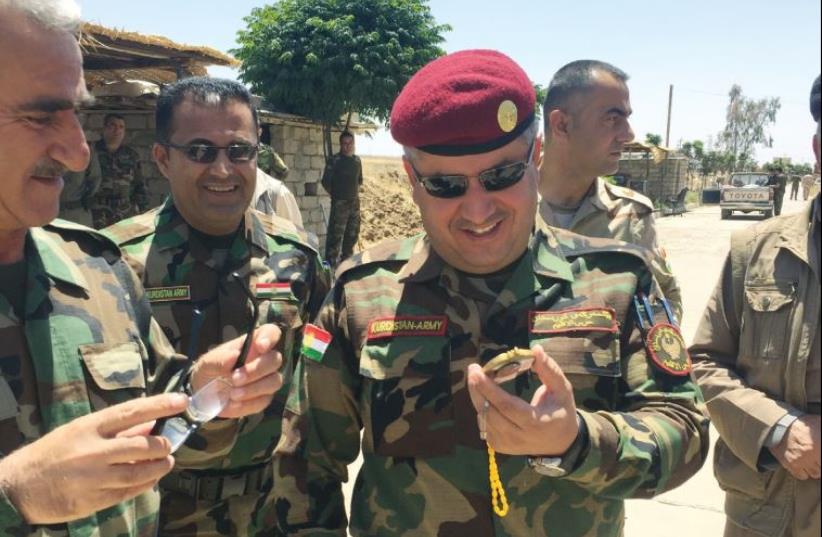 Gen. Tariq Harni smiles at a gift brought from Israel.
(photo credit: SETH J. FRANTZMAN)
Advertisement
The city of Dohuk in Iraqi Kurdistan lies in a valley surrounded by a picturesque mountain range. While the intense Iraqi sun is as hot there as in the low-lying regional capital of Erbil, the mountains provide a distraction, a beautiful landscape that adds to this northern Kurdish city’s charms.Twenty years ago, it was a small village with few amenities. Today it is a tourist attraction for Kurds, other Iraqis and Middle Eastern Arabs, with first-rate hotels, charming restaurants, open picnic spaces for families and a small theme park near the Dohuk Dam, complemented by cascading waterfalls at the bottom of an expansive mountain range. The city has grown by leaps and bounds.So when Islamic State began its offensive last year, sweeping south from the Syrian border and gaining footholds in major Iraqi cities, the people of Dohuk became frightened as the extremists appeared to close in. Many were packing their belongings and preparing to flee.But Vager Saadullah, a political journalist, was tired of running. A refugee since the age of two, he fled with his family from Nerwe, a small village in northern Iraq, to escape Saddam Hussein’s campaign of genocide against the Kurds. His family spent four years in refugee housing in Turkey before coming to Dohuk.Saadullah made the decision that he would stay and fight. He had a rifle from his father, a veteran Peshmerga fighter on behalf of Iraqi Kurdistan, and prepared to become a sniper – with little to no training. But that wasn’t all: He didn’t want anyone to leave, and decided to organize a rally and party in the streets of Dohuk to increase morale.“We had thousands of people come,” he recalled – and in the end, Islamic State never arrived. 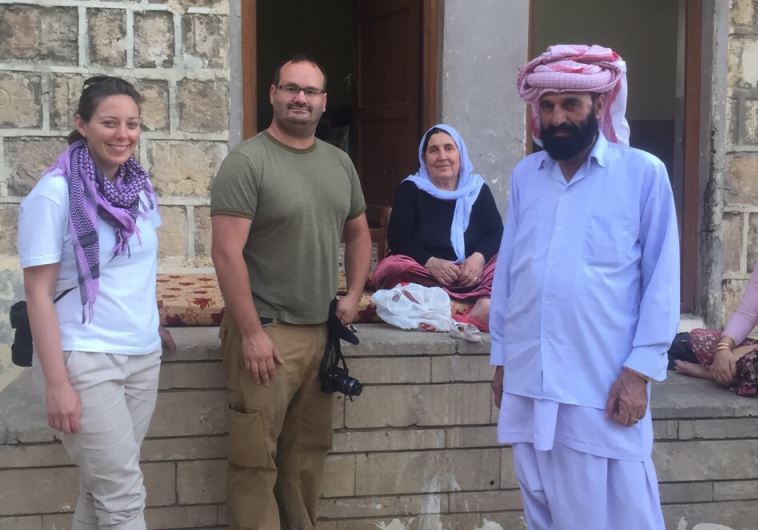 The city center of Erbil, capital of Iraqi-Kurdistan.
(photo credit: Laura Kelly)They may be only 50 km. from Islamic State, the most feared extremists in the world, but as one American living in Erbil noted, “There is a wall of Peshmerga between Islamic State and Kurdish civilians.”Karim emphasizes that Islamic State is not just a Kurdish issue, but one in which the entire world needs to be involved.He says that extremists from all over the world are coming to this region, becoming more radicalized. If the Kurds fall, he warns, the Western countries will be next.“It’s not a Kurdish problem,” he stresses, “it’s an international problem.”
RUTH ZELLWEGER speaks rudimentary Kurdish. The 34-year-old Christian nurse from Germany has been in Dohuk for the last couple of weeks, working with the Christian-Israeli organization Shevet Achim, which identifies children with high-risk cardiac diseases and transfers them to Israel for free medical care.She banters easily with Ramzi Masir, the father of one of Shevet Achim’s patients, at their comfortable Dohuk home.“It’s like a father speaking to a child, it’s not proper language, but he understands what I’m trying to say,” she says.Zellweger has gotten close with the Masir family since their daughter Shana started benefiting from the organization. Shana was diagnosed with a severe heart condition at a young age and required multiple treatments unavailable in local facilities. Another family, the Mikaeels, are visiting with the Masirs, having met them in Israel when their son Rayan was heading there for his treatment.Both Jibraeel Mikaeel and Masir are Peshmerga. They serve in front-line positions in some of the worst areas, and have witnessed a lot of fighting.Like their colleagues near Mosul, they agree, “Just give us better weapons, give us antitank rounds, and we will make short work of Islamic State.”Masir fondly recalls the Jewish history of Kurdistan, asserting that his own family may have Jewish roots.“We appreciate the help from Israel and these organizations; through them we got back our children’s lives. When we were in Israel, I remember people treating us like we were in our home,” remembers Masir.It is a reminder of the rich cultural history of Jews in Kurdistan, most of whom fled to the Jewish state in the 1940s and ’50s. But in bookstores in Erbil, you can find tomes about the history of the country’s Jews.Unlike most other parts of the Middle East, which are rife with anti-Semitism, there is a cultural memory of what Kurdistan lost when the Jews left.In the Peshmerga, many of the older men have fond memories of Israel’s support for their cause in the 1960s and ’70s. Fighters would fly to Israel for military training via Iran in the days when Israel had relations with the Persian country. Many others received similar training from Israelis in the Kurdish mountains; some even stayed to fight with them.Saadalah, the political journalist, whose uncle trained in Israel, tells the story of a Kurdish politician criticized for having a photo on Facebook showing him with Israelis.“‘Yes, I put it on my own Facebook account, so what?’” Saadalah quotes him as saying.Israeli politicians have been more outspoken. In June of last year, Prime Minister Benjamin Netanyahu stated clearly that he supported Kurdish independence. On June 8, Justice Minister Ayelet Shaked averred, “The Jewish and Kurdish nations share a history.”Yet for Kurdish political leaders, it is more difficult.Privately, they speak of support for Israel or wanting closer economic and military ties; publicly, they want a resolution to the Israeli-Palestinian conflict. Politicians think Netanyahu is a “harsh man,” while many speak of former president Shimon Peres with admiration.When it comes to anti-Semitism or anti-Jewish views; however, they are adamantly against them. Kurdistan portrays itself as a haven in the region for minorities. It has taken in 1.7 million refugees, including Arab Christians, Yazidis and other, smaller minorities. Churches dot the landscape in Erbil and Dohuk, and beer is openly sold in shops in Christian areas. The call to prayer is reserved and quiet; religion is a private matter.But the Jewish history of the region is not well preserved. The tomb of Nabi Nahum in al-Qush is in ruins.Jewish quarters of major cities like Erbil or Zakho, where Jews were once a majority, are in ruins, according to a local professor, and there is no easy way to find old synagogues or sites.On the front lines, the fighters admire Israel’s abilities.“Israelis and Americans are like our cousins,” Gen. Harni says. “Israel is brave and fought all this time against the enemy. They are in an everyday war, and they are like us since 1948; we were fighting even before the creation of Israel.”Today, the Kurds are still fighting – on one front, against Islamic State, and on another, toward their hopes and dreams for an independent Kurdistan that will free them from the chaos of Iraq.This story first appeared in the Jerusalem Post Magazine.