Security sources say the explosion in the Hezbollah-controlled southern suburbs of the Lebanese capital caused by 2 suicide bombers.

By REUTERS
The scene of the explosion in southern Beirut
(photo credit: COURTESY LEBANESE MEDIA)
Advertisement 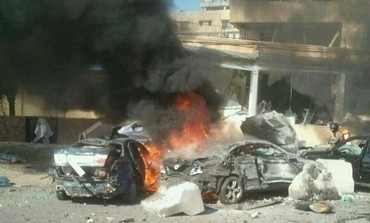 Scene of explosion
BEIRUT - A twin suicide bombing hit the Hezbollah-controlled southern suburbs of Beirut on Wednesday during the morning rush hour, killing at least four people and wounding 70 in an attack targeting Iran's cultural center, security sources said.Security sources said the blasts were caused by two suicide attackers, one in a car and the second on a motorcycle. The same tactics were used by suicide bombers who attacked the Iranian embassy in November.A militant group linked to al-Qaida, the Abdullah Azzam Brigades, claimed responsibility for the attacks on Twitter, saying the Iranian culture center was the target.The windows of a nearby orphanage were blown out by the blasts. Children were peering out and screaming "bomb, bomb." Some were crying. A man working at a sweet shop opposite the bomb site said the blast shook the entire area."We heard one explosion and then another," he said.Human remains were found nearby. The casualties included a number of children.The area is controlled by the Shi'ite movement Hezbollah, which is fighting alongside President Bashar Assad's forces in neighboring Syria in a conflict that has fueled tensions between Sunni and Shi'ite Muslims in Lebanon.Radical Sunni Islamists sympathetic to the anti-Assad rebellion have pledged to attack Hezbollah on Lebanese soil for helping Assad, a member of the Alawite offshoot of Shi'ite Islam who is also backed by Shi'ite Islamist Iran.Hezbollah blamed Saudi Arabia, a Sunni power that backs the Syrian opposition, for the November attack on the Iranian embassy, one of a series of car bomb attacks targeting Shi'ite areas in Beirut and eastern Lebanon.Wednesday's blast occurred near the Kuwaiti embassy and a Lebanese army barracks. Numerous Lebanese politicians also live in the area, which is not far from Beirut airport.Television footage showed fire trucks and soldiers securing the area as ambulances raced to the scene. A number of cars were badly damaged by the blasts. One was flipped onto its roof. Another was still ablaze several minutes after the blasts.A wounded man was seen carried away on a stretcher and a young girl was being evacuated by two men. Glass covered the road and the facades of nearby buildings were torn off.The Lebanese security forces last week arrested a man identified as the al-Qaida-linked mastermind of the recent string of car bomb attacks. The arrest of Naim Abbas was followed by a security sweep that resulted in the seizure of a number of cars rigged with explosives and ready to be deployed.Three years of civil war in Syria has spilled over into Lebanon, exacerbating Sunni-Shi'ite tensions and triggering violence including frequent clashes between armed groups in the northern city of Tripoli.The war has also affected Lebanese politics, leading to paralysis in government. Prime Minister Tammam Salam on Saturday finally managed to form a government grouping rival parties after the country went 11 months without a cabinet.