Prosor at UN: Hamas never got memo that Gaza withdrawal was supposed to end jihad against Israel 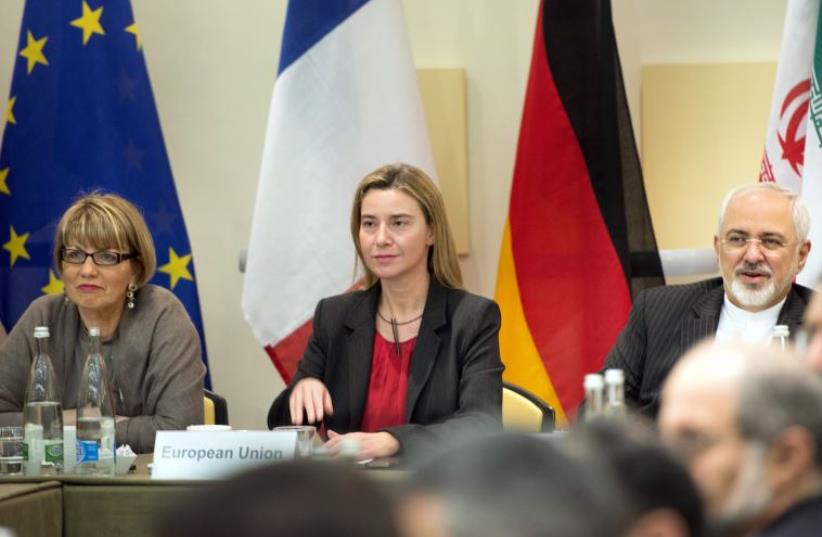 EU Political Director Helga Schmid (L), EU High Representative Federica Mogherini (C) and Iranian Foreign Minister Javad Zarif at nuclear talks in Lausanne March 31, 2015
(photo credit: REUTERS)
Advertisement
One of the P5+1’s top negotiators in the nuclear talks with Iran, Helga Schmid, paid a low-profile visit to Israel earlier this week to brief senior Israeli officials on the deal she was instrumental in writing.Western diplomatic sources said Schmid came for a 24-hour visit at the beginning of the week and briefed a number of senior Israeli officials, including National Security Adviser Yossi Cohen, chairman of the Knesset Foreign Affairs and Defense Committee Tzachi Hanegbi and Foreign Ministry director- general Dore Gold.Schmid is the deputy secretary- general of the EU’s External Action Service, and her boss – Federica Mogherini – is expected to travel to Iran next week. Though the P5+1 – the US, Russia, China, Britain, Germany and France – didn’t raise issues such as Iran’s human rights record or its destabilizing activities in the region during negotiations over the nuclear issue, Mogherini is expected to do so during her visit to Tehran.Thursday marked the first day that Prime Minister Benjamin Netanyahu did not publicly slam the agreement since it was announced nine days ago, but Ambassador to the UN Ron Prosor did, telling the UN Security Council that “in the summer of 2015, the countdown to Iran becoming a threshold nuclear state has begun.”“In five years, the embargo against conventional weapons will end; in eight years, they can acquire missile technology; in 10 years, unlimited centrifuges,” Prosor said at the Security Council’s monthly discussion on the Middle East. “This is not disarmament, this is a timetable for Iran to build nuclear weapons.”He said that “in future years, the consequences of this mistake will become clear to all, but for Israel, tomorrow is already too late.” Calling Iran the “godfather of terror around the world,” Prosor said that countries from Argentina to Bulgaria have experienced Iranian terrorism first hand.“Many members of this council described the agreement as the opening of a new chapter,” he said. “Well, I’m sorry to ruin a good book, but Iran’s Supreme Leader Ayatollah [Ali] Khamenei has a different story to tell. You may have signed a deal with the poster boys of Iran, [Foreign Minister Mohammad Javad] Zarif and [President Hassan] Rouhani, but in Iran, the ayatollah and his Revolutionary Guards are the ones calling the shots.”Prosor quoted Iran’s Deputy Foreign Minister Abbas Araqchi as saying two days ago: “We have told the P5+1... that we will supply arms to anyone and anywhere... and will import weapons from anywhere we want and we have clarified this during the negotiations.”Moving to other issues, Prosor reminded the Security Council that 10 years ago this month Israel withdrew from the Gaza Strip and four West Bank settlements.“Ten years after withdrawing from Gaza, the territory we left has become a safe haven for terrorists.Hamas, an internationally recognized terrorist organization, has used and abused the people of Gaza to continue its war against Israel,” he said.“Apparently they didn’t get the memo that an Israeli withdrawal was supposed to end the jihad against its people.”Gaza, Prosor said, was supposed to be the pilot project for Palestinian governance in the West Bank, “but the pilot crashed the plane.”"And since then," he said, "that model has been repeated throughout the Middle East where nation-states are disintegrating and “bands of religious zealots are rushing in to create new theocratic states in this vacuum.”“The Google Map of the region must be updated every day, based on which terror group has seized control of which area during the previous night,” he said.Turning to the UN Human Rights Council Commission of Inquiry into last summer’s Operation Protective Edge, Prosor delivered withering criticism, pointing out that the commission said it could not “conclusively determine the intent of the Palestinian armed groups” with regard to the construction of tunnels into Israel.“I have a suggestion,” he said. “Maybe these tunnels were intended to be the new metro system in Gaza? In that case, as a previous ambassador to the Court of St. James, let me give you a tip – Don’t forget to mind the gap.”The UN’s special Mideast envoy Nickolay Mladenov told the Security Council that Israel and the Palestinians are further apart today from a two-state solution than they’ve ever been.While slamming Israel again for settlements, Mladenov did “welcome the recent decision by Israel to add 8,000 new work permits for Palestinians from the West Bank, bringing the number of permits issued for employment in Israel to a new high of some 60,000.”He said this, and other initiatives, should be expanded and sustained.He called on “all actors in Gaza to provide information as to the possible whereabouts and conditions of two Israeli civilians who had entered Gaza sometime over the past year and remain unaccounted for.”Palestinian Authority Ambassador Riyad Mansour told the Security Council that while “Gaza is being suffocated and dehumanized, the rest of occupied Palestine continues to be ravaged by Israel’s vicious settlement campaign, settler terror and repression.”