Lebanon central bank says must comply with US law against Hezbollah

The US Hezbollah International Financing Prevention Act (HIFPA) passed in December threatens sanctions against anyone who finances Hezbollah in a significant way. 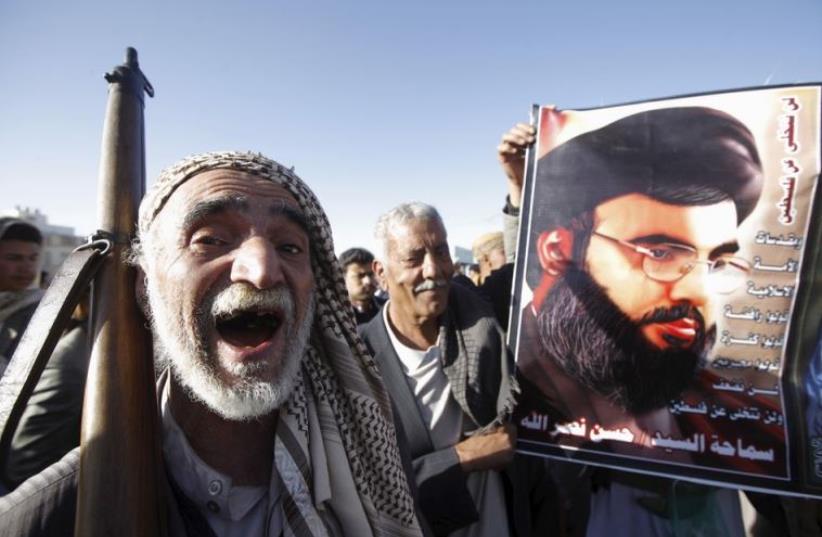 A Houthi militant shouts slogans as he stands next a poster of Hezbollah leader Hassan Nasrallah during a rally against US support to Saudi-led air strikes in Sanaa
(photo credit: REUTERS)
Advertisement
Lebanon's central bank governor said on Tuesday Lebanese banks must comply with a new US law targeting Shi'ite group Hezbollah's finances and that failure to do so risked international isolation of the country's banking sector.Heavily armed, Iran-backed Hezbollah, which is classified as a terrorist group by the United States, wields enormous political influence in Lebanon and its powerful military wing is playing a major role in the Syrian conflict.The US Hezbollah International Financing Prevention Act (HIFPA) passed in December threatens sanctions against anyone who finances Hezbollah in a significant way.The law has ignited an unprecedented dispute between Hezbollah and a central bank widely seen as a pillar of stability in an otherwise weak and dysfunctional Lebanese state.Governor Riad Salameh said banks must comply with the law but that decisions to close accounts would be overseen by the central bank to ensure that the closures were justified."The US law has to be implemented worldwide and in Lebanon," he said in a statement. "It is not possible to guarantee credit stability if (the central bank) does not implement the US law.”"If we do not do that ... our banking sector could become isolated from the world," he said.Salameh has assured citizens that the regulations protect them from having bank accounts arbitrarily blocked or closed.Banks which intend to close accounts of individuals or organizations considered to be in breach of the US law must provide justification for that decision, and wait for a response from the Central Bank's Special Investigation Committee, which "enjoys independence," he said.The United States has a list of people sanctioned for terrorism. A Lebanese bank or company doing business with anybody on the list will not be able to deal with any US financial institution because that institution could be fined for non-compliance.Hezbollah, whose fighters played a major role in forcing Israel to withdraw from southern Lebanon in 2000, enjoys strong support in the Lebanese Shi'ite community. Its members include government ministers, lawmakers and local councilors.Lebanon's banking sector accounts for around 6 percent of gross domestic product.Since 2001, the United States has put more than 100 individuals and entities affiliated with Hezbollah onto sanctions lists under existing anti-terrorism funding legislation, but the new law is aimed at Hezbollah specifically.