The operation has targeted Sunni Muslim insurgents from the former Nusra Front, a group that was aligned to al-Qaida. 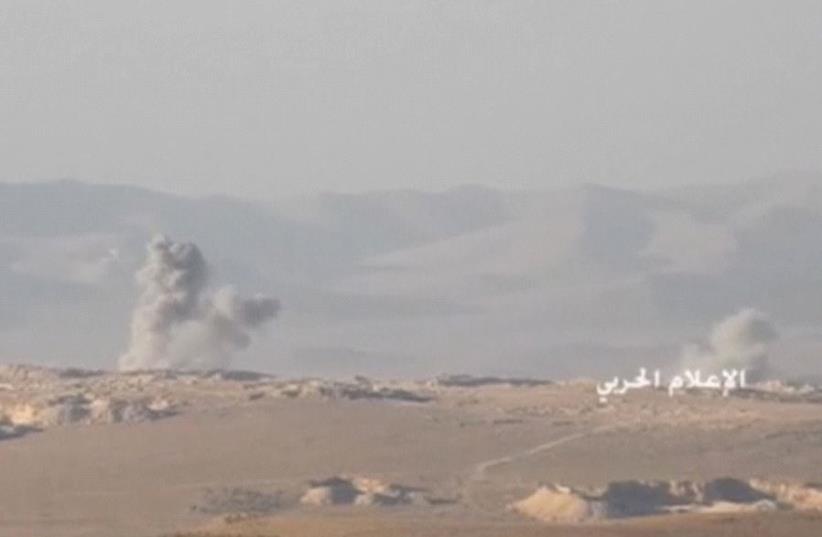 A still image taken on July 21, 2017 from an undated footage by Hezbollah Military handout shows smoke rising at an unidentified location at the Syrian-Lebanese frontier.
(photo credit: REUTERS)
Advertisement
Lebanon's Shi'ite militia Hezbollah and the Syrian army advanced against Sunni militants on Saturday, the second day of an assault to drive them from their last foothold along the Syria-Lebanon border, pro-Damascus media reported.The operation has targeted Sunni Muslim insurgents from the former Nusra Front, a group that was aligned to al-Qaida and who have controlled the barren, mountainous zone of Juroud Arsal.A military media unit run by Hezbollah said its forces captured Jwar al Sheikh, Wadi Kriti and other areas in the southern part of Juroud Arsal.Syrian warplanes struck militant positions on the Syrian side of the border, near the Syrian town of Fleita, it said.The offensive began on Friday and killed at least 23 Nusra militants on the first day, the Hezbollah unit said. At least five Hezbollah fighters were also killed.A security source put Hezbollah's death toll at 15 early on Saturday, and said at least 43 militants had been killed.The Lebanese army has taken up defensive positions around Arsal town, ready to fire at Sunni militants trying to break through its lines, and has beefed up security in the area.The Lebanese army is not taking part in the operation, according to a commander in the pro-Damascus military alliance and a Lebanese security source.The army is facilitating the passage of Syrian refugees fleeing the area, with UN supervision, the security source said.UN refugee agency UNHCR and aid groups are preparing for an influx of Syrian refugees from Juroud Arsal and Arsal town. Only a handful of refugees were reported to have fled on Friday.Several thousand Syrian refugees occupy camps east of Arsal.Hezbollah, which is backed by Iran's Shi'ite government, has played a critical part in previous campaigns against Sunni insurgents along Lebanon's border, part of a wider role it has played in backing President Bashar al-Assad in the Syrian war.Hezbollah's role has drawn criticism from its Lebanese political opponents, including Sunni Prime Minister Saad al-Hariri, who is a Sunni.