Follow the latest updated on the attempted coup in Turkey. 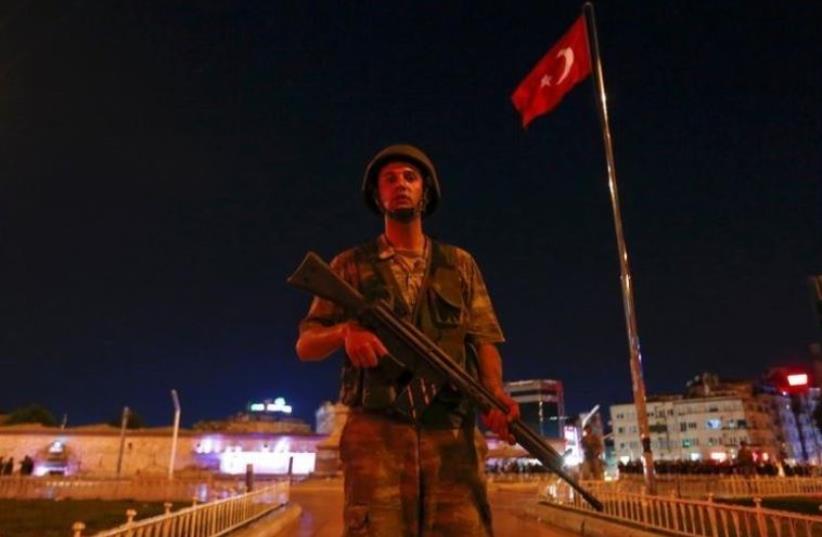 A Turkish military stands guard near the Taksim Square in Istanbul
(photo credit: REUTERS)
Advertisement
Saturday, July 168:35The head of Turkey's armed forces has been rescued after being held hostage during an attempted coup by a military faction which used tanks and attack helicopters to try to seize power overnight, a senior Turkish official said. Hulusi Akar had been held by rebel soldiers during the attempted coup, Turkish broadcasters said8:21Turkish authorities have detained 754 members of the armed forces after an overnight coup attempt by a faction within the military that used tanks and attack helicopters to try to overthrow the government, a senior official said.8:10Turkey's military headquarters are now held by pro-government forces but small groups of rebel soldiers behind an overnight coup attempt are still resisting and control some military helicopters, a senior Turkish official said on Saturday.
The official said the pro-coup soldiers did not control any fighters jets and that the helicopters they were still using would be brought down swiftly. Attacks on parliament and the presidential palace had largely stopped, the official said.
A second official said 29 colonels and five generals had been removed from their posts in the wake of the coup attempt.