The volume of traffic has caused deaths on the rail track and the destruction of buildings and infrastructure. 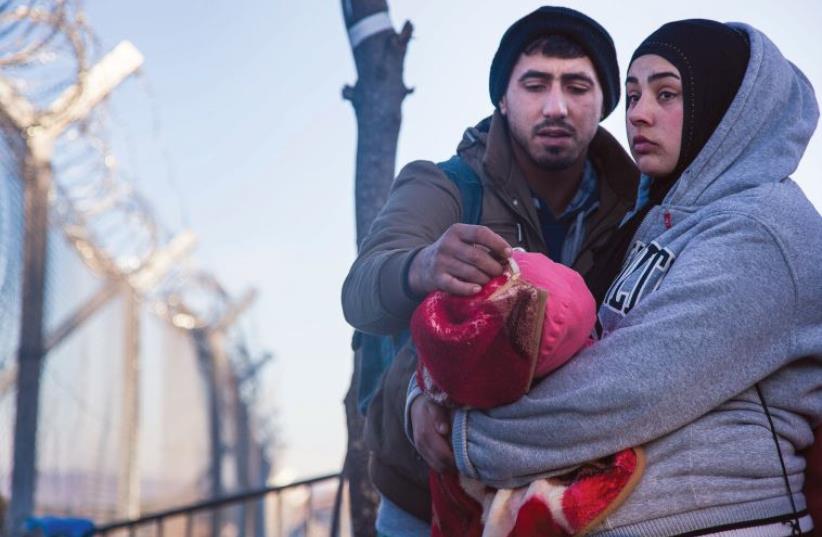 Taken soon after this Syrian couple learned they would not be allowed to cross to Macedonia
(photo credit: MERAV NAOR-WEINSTOCK)
Advertisement
Macedonia is unable to deal with problems that the European Union itself is not capable of solving, Foreign Minister Nikola Poposki told a breakfast meeting of the Israel Council on Foreign Relations in Jerusalem on Thursday.Amid occasional exclamations of “welcome to the club” from members of his audience at the King David Hotel, Poposki, whose country has been thrust into international headlines due to the migrant crisis, commented that no matter what it does with regard to the problem, it is perceived in a negative light.Even though Macedonia is not a member of NATO or the European Union, it is expected to follow their directives concerning the masses of migrants who are trying to cross into Macedonia from the Greek border in order to continue north to Western Europe.Macedonia, with a population of 2.1 million, is a landlocked country, slightly larger in area than Israel. It has been unsuccessfully negotiating for access to NATO and the EU for more than a decade. “We’re the only country in Europe that hasn’t managed to join NATO,” said Poposki, adding that his country had been treated unfairly by both NATO and the EU.Like Israel, said Poposki, Macedonia is situated in a difficult environment, and when it gained its independence from the former Yugoslavia in September 1991, most of its surrounding neighbors were hostile to the idea.At the height of the Arab Spring, Macedonians didn’t take much interest because Libya, Syria and Iraq were far away. It was true that Yugoslavia had been heavily involved with these countries, but Macedonia was not. But then it was realized that 140 Macedonians were fighting in these countries.“How can we have a European country that is fighting for the wrong cause and using methods that are unacceptable in our country, and what will happen when they come back?” asked Poposki. There have already been 30 Macedonian casualties – people who were ready to die for such a cause, “and we can only think of the consequences in our part of the world.”No one should have been surprised by the migration crisis, he continued. “There were so many things that were visible, but we were not ready.”Twenty-two kilometers of border between Greece and Macedonia have been sealed as of this week to prevent illegal migration, but in 2015 alone, said Poposki, 800,000 people crossed from Greece into Macedonia because it is the shortest, cheapest and most efficient road from the Middle East to Western Europe, and it’s the only border through which migrants entering the country are not part of the European Union or the Schengen (visa-free) area.Poposki also declared that it is wrong to cast all the blame for the migrant crisis on Greece, which is very vulnerable in terms of migrant penetration.“No one should blame what is happening in Europe on Greece,” he said.The volume of traffic has caused deaths on the rail track and the destruction of buildings and infrastructure.The only good news out of the crisis as far as Macedonia is concerned, he revealed, is that “the critical situation has enabled us to work more closely with Greece on political and practical levels.”Macedonia is setting up measures for a proper registration system for migrants so that it can separate genuine refugees from people who are simply looking for better jobs, and so that potential terrorists can also be identified before they can do any damage.The migrant crisis cannot be solved without an arrangement with Turkey, he said, and it is important that Greece also be part of the decision making process.He said that it is unacceptable for NGOs to put up tents within a few meters of the border fence, thus wrongfully creating anticipation, and portraying Macedonia as the bad guys. “You can deal with the pressure of 500 people in tents, but not with 15,000,” he said.At the present time Macedonia is not accepting migrants who want to stay, and the migrants themselves are disinterested in staying.But Poposki is under no illusions. When migrants can no longer get to Germany, Austria, Sweden or other countries in Europe they will look to Macedonia.“We’re willing to give them humane treatment and safe transit, but no way will we take the burden for problems that the EU is not ready to resolve,” declared Poposki.