Most of Gazan's songs are about random topics such as cats, trousers and Palestinian politicians. 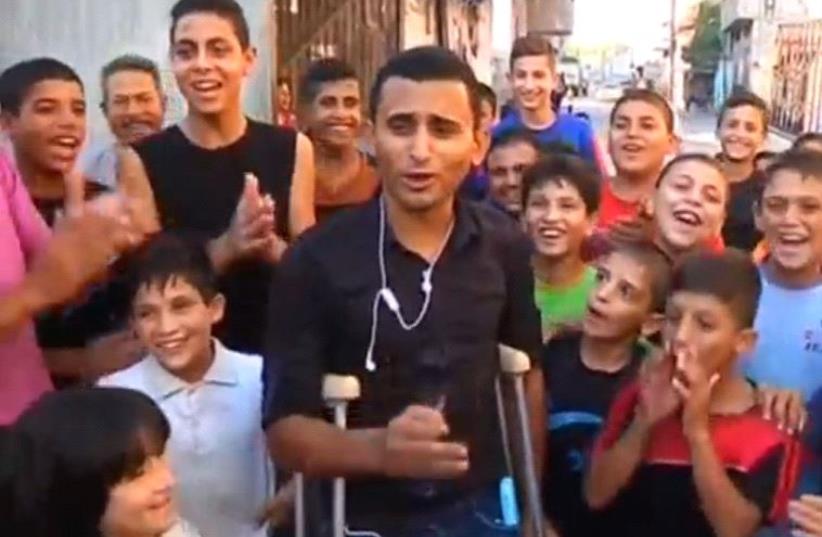 Former Hamas guard Adel Meshoukhi
(photo credit: SCREENSHOT/REUTERS)
Advertisement
Adel Meshoukhi is a known name in the streets of Gaza. Dozens of youngsters mob him when he steps out, chanting his name, and singing some of his songs.A former guard for the Hamas terrorist group that rules the Gaza Strip, Meshoukhi has so far posted four videos in as many months. Most of them are about random topics such as cats, trousers and Palestinian politicians.Meshoukhi says his aim is to make Gazans, who live under the rule of a terrorist group and a security blockade imposed by Egypt and Israel, forget their sufferings for a while. The Strip's economy is in turmoil and unemployment is at 43 percent among the territory's 1.95 million population.With catchy beats, the songs have been criticized for lacking substance, but the 32-year-old says his purpose is to entertain."It is a new kind of art I have created, or not really created, but I am introducing it in the Gaza Strip. An art in which words are meaningless, its purpose is only to entertain," he said."My songs are not substandard, they do not carry obscene words and they do not carry immoral words. On the contrary, the words are nice, and these songs need a sweet soul," he said.Gazans can be seen watching Meshoukhi's videos on their laptops and mobile phones as they sip their drinks in a cafe."They do not have a purpose, however they make us laugh, they make a person laugh. The silliness of it makes us laugh," said Alaa al-Farra.Another fan, Wael Aburouk, said the entertainer must be commended for his "achievement" which has given a voice to the disaffected Gazan youth.