According to Politico, Qatar Foundation has on a number of occasions provided a platform to controversial cleric Tariq al-Hawwas. 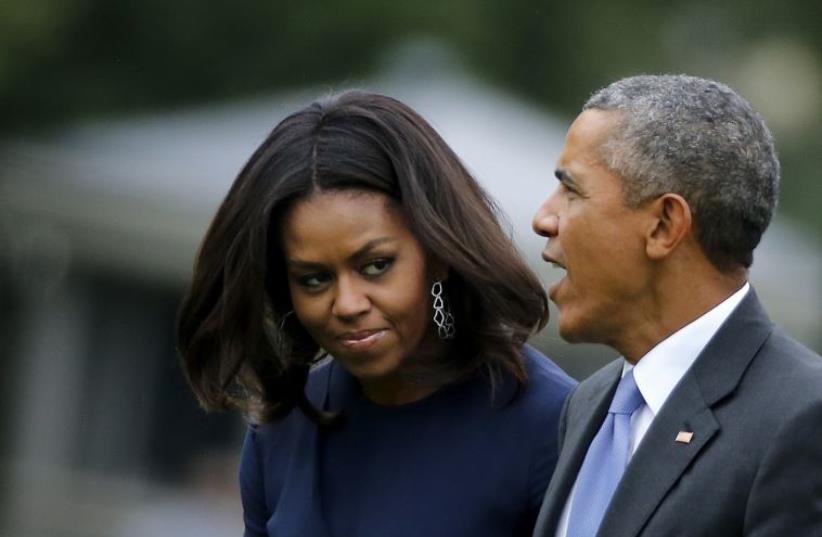 US President Barack Obama (R) and first lady Michelle Obama arrive from New York to the South Lawn of the White House in Washington
(photo credit: REUTERS)
Advertisement
First Lady Michelle Obama's trip to Qatar earlier this week to discuss women's rights and education is drawing scrutiny in some segments of the American press after it was learned that she made an appearance at an institute that recently hosted a sheikh who in years past has delivered .According to the online news outlet Politico, Obama gave a speech to a conference staged by the Qatar Foundation, which invited the first lady to hear her thoughts about tolerance and education.Yet just days before Obama's scheduled visit, the foundation's educational center provided a platform to an Islamic cleric, Tariq al-Hawwas, who has been known to make remarks denouncing "Zionist aggressors" whom god should "count them in number and kill them completely, do not spare a [single] one of them."According to the Middle East Media Research Institute, the sheikh gave a sermon in 2013 bemoaning the fact that Hitler did not "finish off" the Jews, "thus relieving humanity of them."The first lady's trip to the oil sheikhdom was aimed at promoting her "Let Girls Learn" campaign to boost education for young girls. She spoke at the World Innovation Summit for Education in Doha, which was also attended by the first lady of Qatar, Sheikha Moza bint Nasser.When asked by Politico for comment as to whether the first lady was aware of her hosts' tolerance for anti-Jewish hate speech, a White House spokesperson wrote in an email: “You are asking for a response to a statement made about speakers who the First Lady has never referenced, has never met, and nor will be participating in the First Lady’s event?”Qatar is a touchy political subject. As a nominal US ally, its vast oil wealth buys it clout, yet it has been accused by Israel of supporting Islamic extremists like Hamas and others.