Mosul is the last big city stronghold held by Islamic State in Iraq. Raqqa is the capital of the group in Syria. 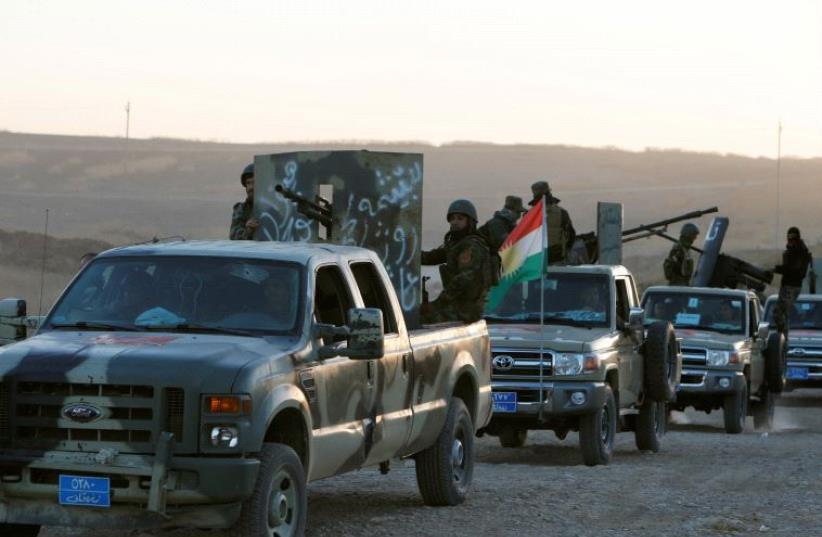 Peshmerga forces advance in the east of Mosul to attack Islamic State militants in Mosul, Iraq, October 17, 2016
(photo credit: REUTERS)
Advertisement
The offensive to seize back Mosul from Islamic State is going faster than planned, Iraq's prime minister said on Thursday, as Iraqi and Kurdish forces launched a new military operation to clear villages around the city."The forces are pushing towards the town more quickly than we thought and more quickly than we had programmed," Prime Minister Haider al-Abadi told senior officials who met in Paris to discuss the future of Iraq's second-largest city via a video conference call. Abadi announced the start of the offensive to retake Mosul on Monday, two years after the city fell to the militants, who declared from its Grand Mosque a caliphate spanning parts of Iraq and Syria.
InsideGov | Graphiq
A US-led coalition that includes France, Italy, Britain, Canada and other Western nations is providing air and ground support to the forces that are closing in on the city.
Mosul is the last big city stronghold held by Islamic State in Iraq. Raqqa is the capital of the group in Syria.The administration of Mosul and surrounding Nineveh province is now one of the main topics of discussion for world leaders. There are concerns the defeat of the ultra-hardline Sunni group would cause new sectarian and ethnic violence, fueled by a desire to avenge atrocities inflicted on minority groups.
InsideGov | Graphiq
Nineveh is a mosaic of ethnic and religious groups -- Arab, Turkmen, Kurds, Yazidis, Christians, Sunnis, Shi'ites -- with Sunni Arabs making up the overwhelming majority.Four days into the assault on Mosul, Iraqi government forces and allied Kurdish Peshmerga fighters are steadily recovering outlying territory before the main push into the city begins.The battle is expected to be the biggest battle in Iraq since the 2003 US-led invasion that toppled Saddam Hussein. Around 1.5 million people still live in Mosul and the battle is expected to last weeks or months.