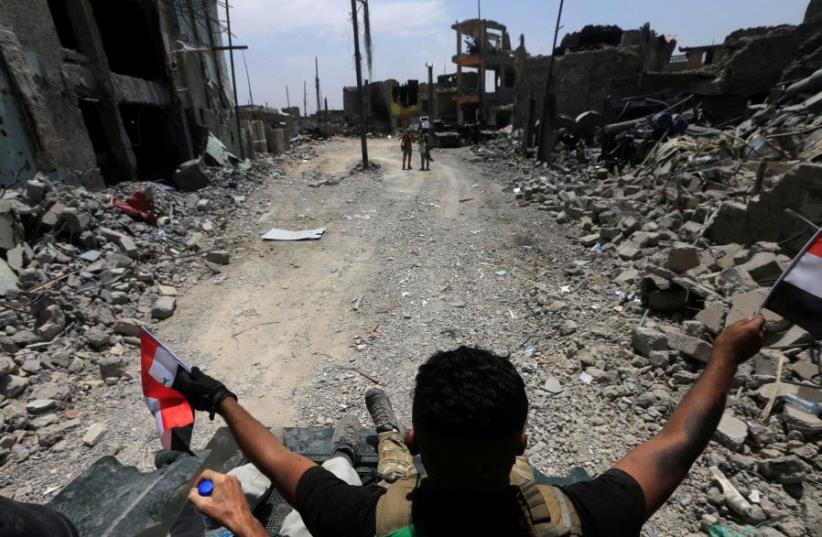 Members of the Emergency Response Division celebrate in the Old City of Mosul, Iraq July 8, 2017.
(photo credit: REUTERS/ALAA AL-MARJANI)
Advertisement
“This is the heart of Mosul,” tweets Ali Y. Al-Baroodi. “From Najafi to Sarichkhana to Farooq streets, I biked with hope as removing the rubble is still [going] on. Seeing it like that gives a variety of mixed feelings. These were the most congested hubs of our city.”Al-Baroodi is one of several activists in Mosul who are trying to bring the city’s message to the world. His video, part of a series he has uploaded, takes the viewer on a bicycle ride through what was once Iraq’s second largest city. Through gutted and barren streets, with just a few workers removing rubble, the local man rides. “Ahead of me is the ancient Nuri mosque with the leaning minaret.” Islamic State blew up the Great Mosque of al-Nuri in June of last year just before the city was liberated from the extremists by the Iraqi army.Al-Baroodi calls the area “home sweet home” and wonders “what has been done to you” in his recent video.Mosul suffered greatly at the hands of ISIS. It was where Abu Bakr al-Baghdadi chose to declare his “caliphate” in July of 2014. It was also where ISIS carried out some of its most heinous crimes, such as selling Yazidi women into slavery.ISIS systematically destroyed cultural heritage in the city. It burned printing presses and cafes, and blew up archeological and religious sites such as the Shrine of Nabi Yunus, the prophet Yunus or Jonah. Once ISIS was ejected from the city last year the Iraqi authorities and locals began salvaging what remained. Hundreds of thousands of the city’s residents had fled. Much of the western part of the city was heavily damaged in the fighting.The work to restore Mosul is going slowly. There are still ISIS mines and Improvised Explosive Devices (IEDs) left behind.BUT THERE IS good news also. At the tomb of Yunus researchers have uncovered inscriptions from the time of the Neo-Assyrian Empire of the 7th century BCE. Baghdad is requesting billions in aid to restore the country after ISIS is gone.The United Arab Emirates is now putting forth a plan to reconstruct the Nuri Mosque and the Al-Hadba Minaret, which translated meant the “hunchback” because it leaned to one side. One wonders if the reconstruction will build it on a slant as well.Many countries and organizations are donating to the city. The United Nations Development Program has begun 350 regeneration projects, and the US-led anti-ISIS coalition says it has restored water to 300,000 residents. Bridges linking east and west Mosul across the Tigris are also being repaired.Mosul Eye, another account that remained active during the war and told of the local population’s suffering, has now become active in documenting reconstruction. On March 10 the account owner tweeted about an art exhibit on Najafi Street. He also tweeted about old Ottoman and post-Ottoman courts recovered from the rubble.Two stone copies of historical Assyrian Lamassu – stone sculptures that depict an exotic beast with the head of a man, the body of a lion and bird’s wings – are being sent to Mosul from the Netherlands. These are the kinds of “pagan” items that ISIS destroyed. Now they will return.A new women’s run, part marathon, was even organized for International Women’s Day.The city which suffered so greatly under religious extremism seems to want to move not only back to normal, but to become a cultural hub and go beyond what it had been before ISIS.However the threat from ISIS still remains. An ISIS tunnel was found south of Mosul on March 11. A truck full of weapons was also found. Unconfirmed news reports also detail clashes near Mosul in which members of the Popular Mobilization Units, a group of government militias, have been attacked by ISIS sleeper cells.Worst of all, the bodies of the dead are still being cleared. According to Kareem Botane, who works with journalists in the region, the bodies of 2,668 civilians and 685 ISIS fighters have been found in Mosul. Some of these civilians were killed by ISIS, but some were killed during the course of the battle for the city. They are still being found in the rubble and being buried.