The man appeared to be a professional who had been blown off course. 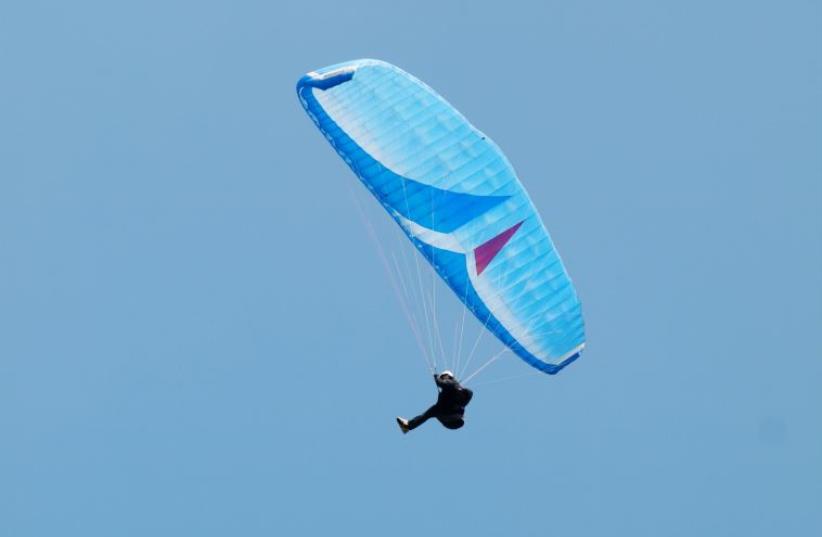 Paragliding (illustrative).
(photo credit: INGIMAGE)
Advertisement
A Turkish citizen who was paragliding with a motorized propeller landed in Lebanon in the Zahrani region around 50km north of Israel’s border. The bizarre scene of the man speaking with Lebanese people who had gathered around him was tweeted online. The suspicious people asked him if he had a local phone number and if someone was waiting for him. He appeared to say he was a professional in the sport.

An identity card and driver’s license showed the man to be named Mahmut Ertunc, born in 1990. He card seemed to show he was from Bingol in eastern Turkey, a city located north of Diyarbakir. The Bingol Ski Center Hesarek hosts paragliding events and is west of the city of Bingol, in a popular and beautiful tourist area. It is not clear whether Mr. Ertunc worked in this area or is connected to it. The man carried a paragliding pilot rating card which showed his name and identity and appears to show he was a professional.Reports in Turkish media Yeni Mesaj said he was taken into custody and the incident was “mind boggling.” Turkish media used the term parachutist, or parasutcunun and parasutcu to describe the man. Photos of a man matching the same name on Facebook show him in Lebanon in the mountains.

#Lebanon Army Intelligence has taken custody of a #Turkey propeller-paraglider who caused a security alert landing on a beach 20 miles north of borders with #Israel.Origin point of takeoff remains unknown. pic.twitter.com/Mnr0Reuqpc

Turkish websites seemed to imply that wind took him off course. According to social media reports Lebanese authorities and intelligence services were investigating the incident. He also has many posts supporting Azerbaijan’s recent war with Armenia, the Turkish government and also pro-Palestinian posts. A the time he wrote that he was 40km from Syria and 60km from Israel. That post was 8 weeks ago. His most recent post appeared to be on November 13 offering Islamic prayers and greetings to the faithful. There are other social media accounts with the same name that do not appear to be the person in the paragliding video. Turkish media Yeni Safak appeared to confirm that the man was from Bingol, noting he landed illegaly in Lebanon and was questioned by the authorities. Other reports claimed he was caught in the wind and that is how he drifted to Turkey. If he left from southern Turkey he would have been 140km from where he landed in Lebanon. The longest journey by a motorized paraglider was around 9,000km according to the Guinness World Records.In 1987 two Palestinian terrorists used hang gliders to fly into Israel from Lebanon, killing six Israeli soldiers.