Netanyahu in first comments on Iraq: US should try to weaken both ISIS and Iran

Speaking on NBC’s Meet the Press, PM urges US not to allow Iran to dominate Iraq the way it dominated Lebanon and Syria. 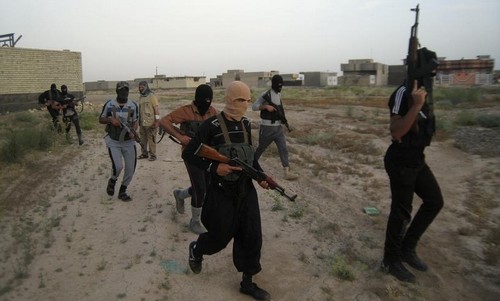 Washington’s approach to the fluid situation in Iraq should be to try simultaneously to weaken both Iran and the Islamic State in Iraq and Syria (ISIS), Prime Minister Binyamin Netanyahu said on Sunday.Netanyahu, speaking on NBC’s Meet the Press, in his first public comments about the situation there, said that both the radical Shi’ites, led by Iran, and the radical Sunnis, led by al-Qaida and ISIS, are both enemies of the US. “When your enemies are fighting each other, don’t strengthen either one of them.Weaken both,” he said.Asked whether he thinks American air strikes against ISIS in Iraq, something currently under consideration, would strengthen Iran, Netanyahu advocated a dual course of action.“One is to take the actions that you deem necessary to counter the ISIS takeover of Iraq,” he said. “And the second is not to allow Iran to dominate Iraq the way it dominated Lebanon and Syria. So you actually have to work on both sides. As I say, you try to weaken both.There are actions that could be taken.”He refrained, however, from giving specific suggestions.In an apparent reference to concern that the US and Iran may cooperate, something that could conceivably lead to less Western vigilance to keep Iran from gaining nuclear arms, Netanyahu said that the worst outcome by far would be that Iran “would come out with nuclear weapons capability.”“That would be a tragic mistake,” he said. “It will make everything else pale in comparison.I think the ultimate and the most important goal in the Middle East is to make sure Iran does not have nuclear weapons capability because those weapons, unlike mortars and machine guns that can kill thousands and chemical weapons that kill tens of thousands, these weapons – nuclear weapons – could kill millions. That should be prevented at all cost.”Asked directly if he is concerned that the US is softening its negotiating stance vis-a-vis Iran to get Tehran’s help on Iraq, Netanyahu responded that, “I hope they don’t come up with a bad deal.”He then went on to describe what a “good deal” on Iran would look like, saying in praise of US President Barack Obama that “a good deal is actually what was negotiated by the United States and President Obama in the case of the chemical weapons in Syria. You haven’t solved the problem in Syria between Sunnis and Shi’ites, but you did remove the bulk of the weapons and soon all of the weapons, and the stockpiles.You removed them.”In contrast, he said, what is currently being discussed with Iran is removing most of the economic sanctions, and allowing Iran to keep most of its capabilities, including stockpiles of enriched uranium and the ability to manufacture nuclear weapons. “That’s a terrible mistake,” he said. “I hope it doesn’t come to pass, because I think this would change history. It would be a monumental mistake.In the context of the world at large and the Middle East as it is today, this would be a tragic, tragic outcome.”In Cairo on Sunday, US Secretary of State John Kerry said the United States wanted Iraqis to find an inclusive leadership to contain a sweeping Islamist insurgency, but Washington would not pick or choose who rules in Baghdad.Kerry was speaking at the start of a Middle East tour after talks in Cairo with Egypt’s new President Abdel Fattah al-Sisi, which covered Western concerns over Egypt’s crackdown on the Muslim Brotherhood and the fallout of the crisis in Iraq.Governments across the Middle East and beyond have been alarmed at the speed with which Sunni gunmen drove Shi’ite Prime Minister Nuri al-Maliki’s troops out of large parts of northern and western Iraq and pushed toward the capital.The United States is sending 300 military advisers to Iraq, prompting Iran’s Supreme Leader Ayatollah Ali Khamenei to accuse Washington of trying to regain control of the country it once occupied and rule “by its stooges” - a charge Kerry denied.“The United States is not engaged in picking or choosing or advocating for any one individual, or series of individuals, to assume the leadership of Iraq,” he said. “That is up to the Iraqi people and we have made that clear since day one.”He said, however, that the US noted dissatisfaction with Maliki’s leadership by Kurds, Sunnis, and some Shi’ites and wants Iraqis to find a leadership “prepared to be inclusive and share power.”At a joint news conference with Egyptian Foreign Minister Sameh Shukri, Kerry also defended US involvement in the Middle East when asked whether US policy had caused recent violence in Iraq and Libya.“What is happening in Iraq is not happening because of the United States in terms of the current crisis. The United States shed blood and worked hard for years to provide Iraqis the opportunity to have their own government.”Kerry, who is expected to travel to Iraq soon at the request of Obama, will also discuss possible oil disruptions from the Iraq conflict with Gulf oil producers this week, a senior State Department official said.“Egypt and the United States share the deep worries about the ongoing situation in Iraq and it is important that the two countries and their Gulf partners coordinate to face the challenges and risks,” Shukri said.