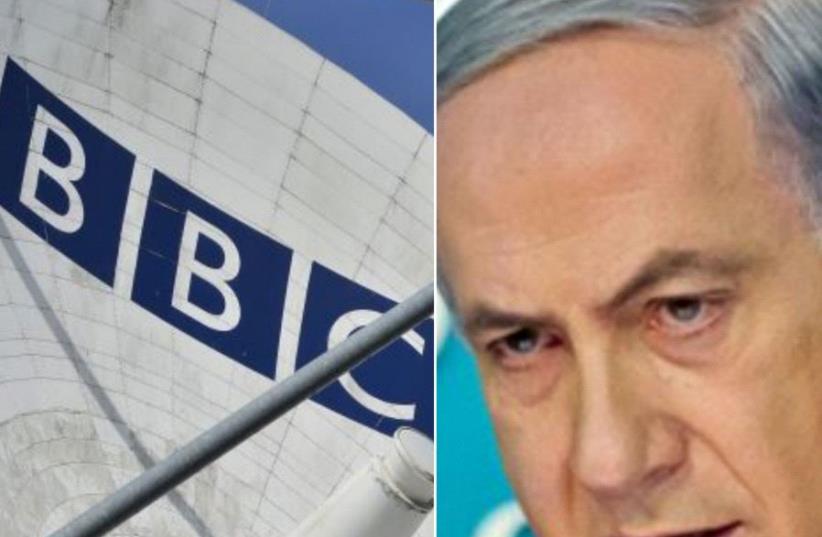 Benjamin Netanyahu/BBC
(photo credit: REUTERS)
Advertisement
Prime Minister Benjamin Netanyahu ordered the Ministry of Foreign Affairs to reproach the BBC after the British news channel released what the premier deemed to be a biased report describing Friday's terror attack, which resulted in the death of a 23-year-old border policewoman. The original report was titled: "Three Palestinians killed after deadly stabbing in Jerusalem," a headline that omitted the fact that the three perpetrators, who operated in two different scenes, were neutralized after they attempted to assault Israeli policemen and killed Staff Sgt. Maj. Hadas Malka.

A female officer was stabbed to death in Jerusalem. To the BBC she is irrelevant because she is Israeli. BBC mourns ISIS terrorists’ death pic.twitter.com/jSBVMvlRMP

Another notable figure who criticized the BBC for its misleading headline was US President Donald Trump's son, Donald Trump Jr., who took to Twitter himself to lambast the station for the article they published. "You mean after they stabbed a female Israeli police officer to death... right? This is as close to being misleading as possible," he charged.

You mean after they stabbed a female Israeli police officer to death... right? This is as close to being misleading as possible. https://t.co/EWZPHiRemU

Netanyahu had reportedly requested that Yuval Rotem, the Director General of the MFA, as well as the Israeli Embassy in London, both act to have the BBC acknowledge that the headline misrepresented the details of the attack and change it. According to the MFA, prompted by the ministry's request, the BBC has since changed the headline of the article. The current headline now reads: "Israeli policewoman stabbed to death in Jerusalem." The tweet that the media outlet published on its official handle and which linked to the article with its previous headline has since been removed. BBC released a statement, saying: "We accept that our original headline did not appropriately reflect the nature of the events and subsequently changed it. Whilst there was no intention to mislead our audiences, we regret any offense caused."This is not the first time Israel lashes out at the BBC for what it says is a biased coverage of the conflict. Last year, the head of Israel's Government Press Office issued a warning to the BBC in reaction to the station's coverage of a different Jerusalem terror attack that claimed the lives of two Israelis. The headline the BBC used to describe the attack was "Palestinian shot dead after Jerusalem attack kills two." The channel later changed its headline to: "Jerusalem: Palestinian kills two Israelis in Old City."