By JPOST.COM STAFF, REUTERS
SEPTEMBER 24, 2013 20:50
Netanyahu looking menacing 370
(photo credit: Marc Israel Sellem/The Jerusalem Post)
Advertisement
Prime Minister Benjamin Netanyahu has instructed the Israeli delegates to boycott Iranian President Hassan Rohani during his address Tuesday at the UN General Assembly in New York.Netanyahu's office said that the prime minister had instructed the Israeli envoy to walk out of the assembly during Rouhani's speech as done last year during former Iranian president Mahmoud Ahmadinejad's address."Despite Iran's charm offensive, the government's policy in Tehran toward Israel has not changed," Netanyahu said.Netanyahu added that Iran's diplomatic overtures to the West over its disputed nuclear program were aimed at allowing Tehran to continue to pursue atomic weapons."Iran thinks that soothing words and token actions will enable it to continue on its path to the bomb," Netanyahu said after US President Barack Obama said at the United Nations that Washington was ready to engage diplomatically with Iran over its nuclear program.Netanyahu spoke with reporters in Tel Aviv after Obama told the UN General Assembly that the United States was ready to deal with Iran but put the onus on Rouhani to prove he is serious about pursuing a nuclear accord. 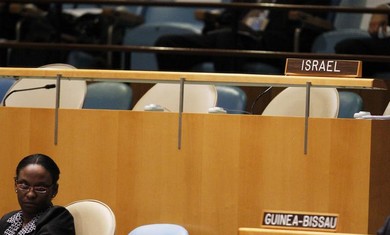 The Israeli delegationNetanyahu said Israel would welcome a diplomatic solution that dismantled Iran's capacity to develop nuclear weapons, but that the Jewish state "will not be fooled by half-measures that merely provide a smokescreen for Iran's continual pursuit of nuclear weapons and the world should not be fooled either".Obama said he wanted to put Rouhani's overtures to the test and challenged him to take concrete steps toward resolving Iran's long-running nuclear dispute with the West.Netanyahu said he appreciated Obama's call on the Islamic Republic to back up conciliatory words with "transparent and verifiable actions", but added: "Like North Korea before it, Iran will try to remove sanctions by offering cosmetic concessions, while preserving its ability to rapidly build a nuclear weapon at a time of its choosing."Finance Minister Yair Lapid said Netanyahu's decision to have the Israeli delegation to the UN General Assembly walk out during the speech of Iranian president Hassan Rouhani was mistaken. He said it was wrong to use the same tactics used against Israel in the past."Israel should not let itself be portrayed as a chronic opponent of negotiations and as a state that is not interested in peaceful solutions," Lapid said. "We should let Iran be the obstacle to peace and not look like we are not open to change."The White House was open to a meeting between Obama and Rouhani in New York, but the Iranians indicated it was too complicated, the official said. Obama, during his address to the UN General Assembly earlier Tuesday touched on the subject of Iran's nuclear program, saying that recent statements from Tehran's leadership show that there is basis for agreement, adding that he has directed Secretary of State John Kerry to pursue a deal. Netanyahu plans to warn the international community to learn from its mistakes with North Korea and not to be fooled by Iran’s new conciliatory attitude toward its nuclear weapons program, when he speaks at the United Nations General Assembly on Tuesday, October 1.Tovah Lazaroff and Gil Hoffman contributed to this report.
Advertisement
Subscribe for our daily newsletter