Organizer of new flotilla to Gazans: You are not alone

Activist says no date has been set for the flotilla to depart but said the group wanted to set off before the end of the year.

By REUTERS
AUGUST 12, 2014 20:22
Mavi Marmara, 2010
(photo credit: REUTERS)
Advertisement
A Turkish pro-Palestinian group plans to send aid ships to Gaza to challenge the Israeli blockade, it announced on Tuesday (August 12), four years after Israeli commandos stormed its flotilla bound for the territory, killing 10 Turks.The Humanitarian Relief Foundation (IHH) said activists from 12 countries had decided to launch a convoy of boats to Gaza, in the wake of the conflict in the territory.Activist Dror Feiler said the mission had two main aims."When we are going to Gaza, we are going with goods but the most important thing is a message to the people of Gaza: 'You are not alone, we see you, we will not let it be silent in the world until the situation will be solved, until the blockade will be lifted.' This is a solidarity message that is as important as the little goods that we can take. This is a humanitarian catastrophe because of political reasons and it can be solved only by political measures," he told a news conference in Istanbul.He said no date had yet been set for the flotilla to depart but said the group wanted to set off before the end of the year."About the date, you know, to start a flotilla and to start a boat and to go with a boat is not like sitting in your car, putting the keys and then just start it. There are many many difficult things to do but we intend to do it in 2014 and we will try the best we can. When we'll come, you will know," said Feiler, after the group met in Istanbul at the weekend.Nine Turks were killed in May 2010 in international waters when Israeli soldiers raided their vessel, the Mavi Marmara, leading a flotilla to break Israel's blockade of Gaza. A tenth Turkish activist died in May from wounds suffered in the attack. 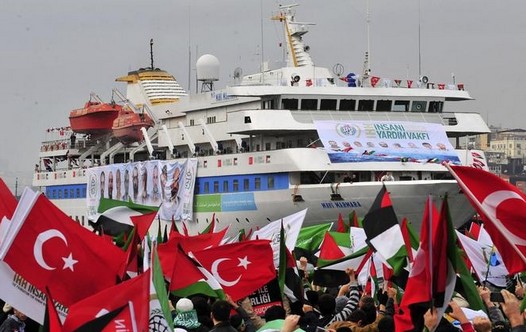 But Feiler said that hadn't deterred the group from wanting to launch another mission."During history, people were always ready to sacrifice their life for freedom. We are also ready to do that. But we hope, of course, that the Israelis will understand that this doesn't serve anything. That even if they will attack us again, we will come again. They also have to understand that the patience of the international community one day will end and then they will have to stop it. So as I said we will go again and again and we cannot be threatened," he said.Turkey's relationship with its former ally Israel had been tense since late 2008 over a previous Israeli military operation in Gaza.The new flotilla plan may hinder efforts to rebuild shattered diplomatic ties between the two countries, just as Ankara launched an "air corridor" carrying wounded Palestinians to Turkey and aid to Gaza.