Hamza Osama bin Laden has continuously called for revenge for the death of his father. 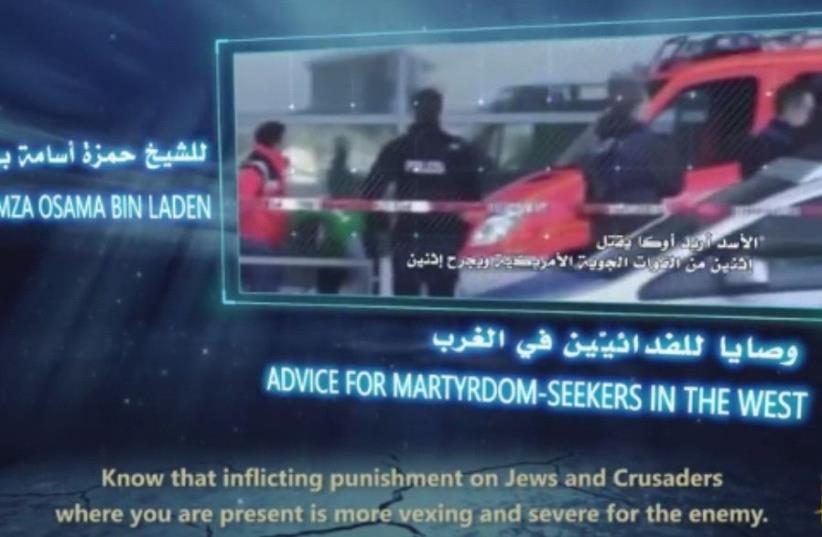 A propaganda video release by Hamza Osama bin Laden calling for lone-wolf attacks
(photo credit: screenshot)
Advertisement
Sheikh Hamza Osama bin Laden, son of 9/11 mastermind Osama bin Laden, called for lone-wolf attacks against Jews and Americans in a new propaganda video released Saturday.The video, entitled 'Advice for Martyrdom-Seekers in the West', stated that "inflicting punishment on Jews and Crusaders" is "more vexing and severe for the enemy." He called for jihadists around the globe  to "avenge the children of Syria, the widows of Palestine, the women of Iraq, and the orphans of Afghanistan." Hamza was not present during the 2011 US Navy SEAL raid in Pakistan, in which his father and brother were killed. As a child Hamza was featured in many propaganda videos and reportedly was being groomed to inherit his father's leadership position, earning him the title of "al-Qaeda's poster child."In July 2016, via audio message, Hamza threatened the United States and called for revenge attacks for the death of his father.  The US State Department has named Hamza a "specially designated global terrorist."