According to a biography of David Cameron, in 2011 Blair contacted the Prime Minister's office with news that Gaddafi wanted to "cut a deal." 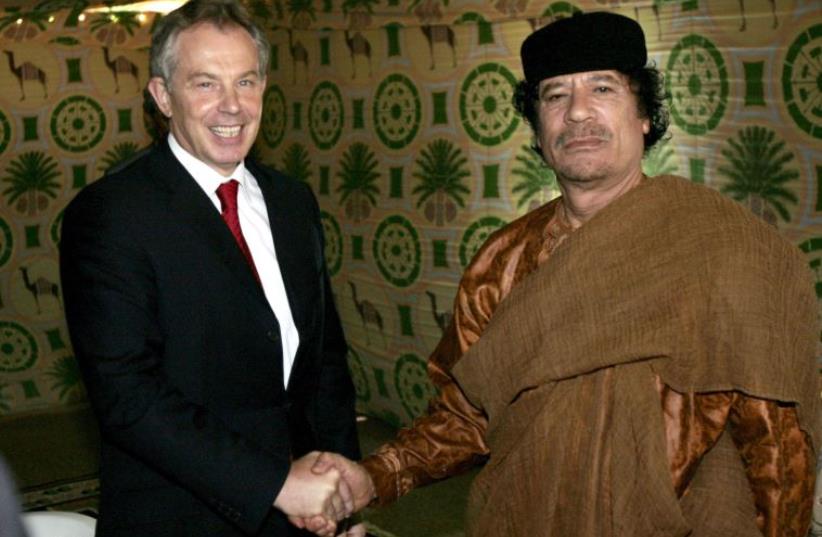 Britain's Prime Minister Tony Blair shakes hands with Libyan leader Muammar Gaddafi near Gaddafi's home town of Sirte May 29, 2007.
(photo credit: REUTERS)
Advertisement
Senior British lawmakers have begun calling on former prime minister Tony Blair to answer questions regarding his alleged attempt to save late Libyan dictator Muammar Gaddafi shortly before his bloody downfall in 2011. According to the Times of London, the widespread outcry among leading British MP's comes in light of an account, written in a biography of the current UK Prime Minister, David Cameron, asserting that Blair contacted Cameron's residence at 10 Downing Street with urgent news that he had been in touch with "a key individual close to Gaddafi" and that the Libyan colonel wanted to "cut a deal." According to the biography by Sir Anthony Seldon, titled Cameron at 10, Cameron refrained from offering Gaddafi any assistance or "doing anything which might be seen to give the Libyan leader succor."Following this revelation, the former Labor leader has come under scrutiny from a number of figures to his right, including  Daniel Kawczynski, a member of Britain's foreign affairs committee, who called Blair's apparent willingness to aid Gaddafi "sordid" and irresponsible." Another conservative on the committee, Nadhim Zahawi, immediately called for an inquiry, saying. "With these revelations, we should be pushing for Blair to come and explain as part of the inquiry" into Britain's broader involvement in the Libyan civil war. The recent affair involving Blair is not the ex-PM's first involvement with Gaddafi. In 2004 Blair was a leading figure in the "deal in the desert," a euphemism for an initiative to disarm Libya's weapons of mass destruction stockpile in exchange for a mutually beneficial oil deal between Britain and the petro-rich North African state. The effort sparked outraged among the families of those killed in the 1988 Lockerbie bombing, in which a transatlantic flight was downed by explosives planted by Abdul Baset Ali al-Megrahi, a Libyan national who was released from Scottish jail after the Blair government's apparent intervention.