In his Friday sermon, Abu Arkoub launched a scathing attack on Faraj, saying he wouldn’t be able to thwart plans to “liberate Palestine. 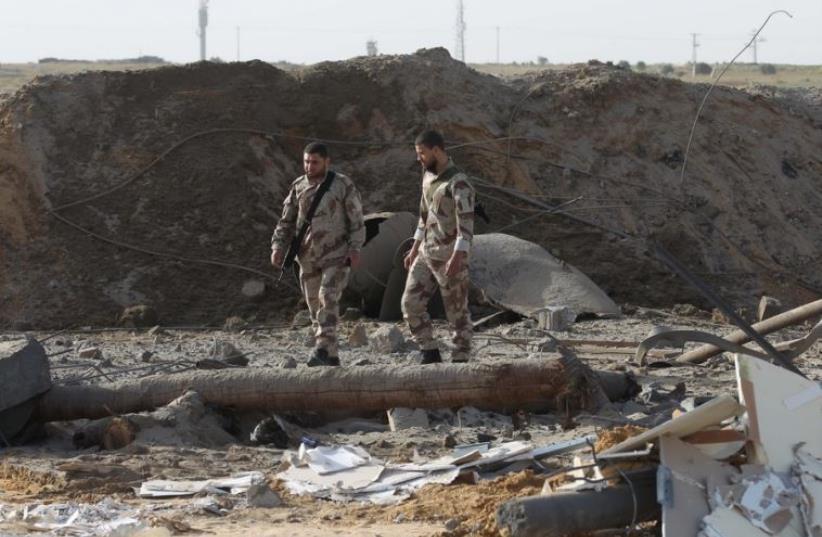 Palestinian security walk amidst debris following an Israeli airstrike in the southern Gaza Strip near Rafah
(photo credit: SAID KHATIB / AFP)
Advertisement
The Palestinian Authority on Friday arrested mosque preacher Musab Abu Arkoub, who strongly criticized Intelligence Chief Majed Faraj.The arrest came amid growing criticism of Faraj for revealing that the PA security forces have foiled 200 attacks against Israel since October 2015. In an interview with Defense News, Faraj, who is believed to be a strong candidate to succeed Mahmoud Abbas, also revealed that 100 Palestinians have been arrested for planning attacks against Israel.On Saturday, the Palestinians security forces arrested four residents of the village of Qarawet Bani Hasan, near Nablus, on charges of spraying graffiti on walls accusing Faraj of treason.The four suspects were identified as Adnan Mir’i, 21, Ahmed Mir’i, 20, Ayoub Mir’i, 38 and Mohamed Mir’i, 35.The graffiti denounced Faraj as a “traitor” and called on Palestinians to kill him.Palestinian security officers arrested Abu Arkoub, a prominent figure with the Islamist Hizbut Tahrir (Party of Liberation), shortly after he delivered a sermon at a mosque in his hometown of Dura, near Hebron.Abu Arkoub teaches dentistry at Al-Quds University in Abu Dis, near Jerusalem. Last year, PA security forces arrested him for “security-related offences,” but were forced to release him on court order.In his Friday sermon, Abu Arkoub launched a scathing attack on Faraj, saying he wouldn’t be able to thwart plans to “liberate Palestine.”“Oh Muslims, he who believes that he could thwart the liberation of Palestine is living in an illusion,” Abu Arkoub, said referring to the intelligence chief’s remarks to Defense News. “He who believes that he can go against the will of Allah is crazy. Will Majed Faraj and his criminal gang succeed in preventing the liberation of Palestine? No.”Last week, some Palestinian factions also strongly condemned Faraj for his remarks and called for bringing him to trial for treason.