Mufti Muhammad Hussein also maintains, according to PMW, that women need to obey their husbands, cannot refuse demands for sex and can be beaten by their male relatives. 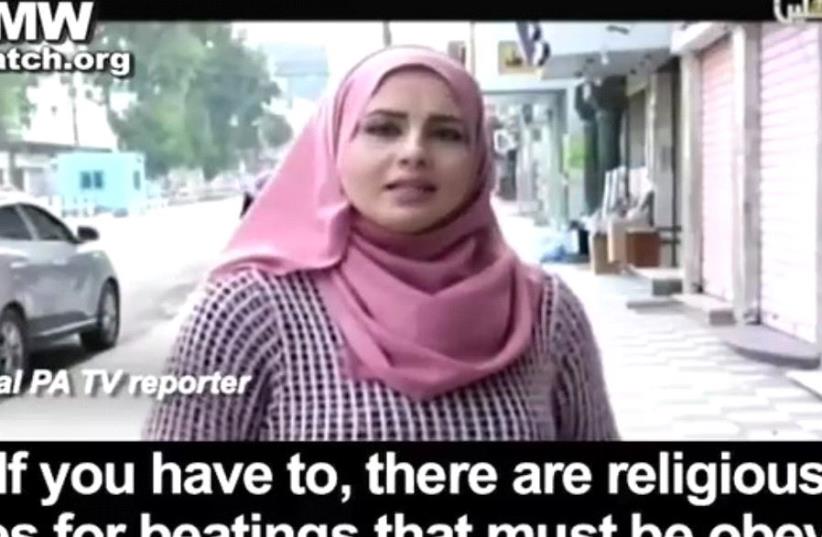 PA TV reporter advising viewers to beat their wives
(photo credit: PALESTINIAN MEDIA WATCH)
Advertisement
The Palestinian Authority's Grand Mufti, the top religious official for Palestinians, declared in a television broadcast on December 16 that women must have a chaperon when travelling to the United Arab Emirates (UAE) city of Dubai, according to Palestinian Media Watch (PMW).The statement from Mufti Muhammad Hussein comes amid the recent normalization agreement between Israel and the UAE, allowing Israeli travelers to visit the country.  When asked during the program Fatwa, part of the official PA television channel, if a man's wife is allowed to travel to Dubai with her daughters without a male chaperon, he replied that “there has to be an accompanying man from her family on the trip.”Among other religious conservative positions held by Hussein, as reported by PMW, are the notions that women need to obey their husbands, cannot refuse demands for sex, and that male relatives have religious authority to beat female relatives if they act in disobedient ways. When asked during Ramadan on the right to sex, Hussein said that even if a man does not pray and fast, it "is not a reason [not to have sex] … It is his right… This woman may not and has no rights to deny him this right, especially during the permissible time, which is night time.”Another religious leader featured on PA TV, Sheikh Samih Hajjaj, gave his opinion on the matter of rules for beating one's wife. “Let’s say that a husband senses that his wife is lying. First he needs to rebuke her and quote the Quran and Hadith on the ban on lying," Hajjaj said.“The [Muslim] scholars said that the beating can be with a small brush or a handkerchief, and the number of blows should not exceed 10,” he said.“Not with a stick or pipe,” the host retorted.