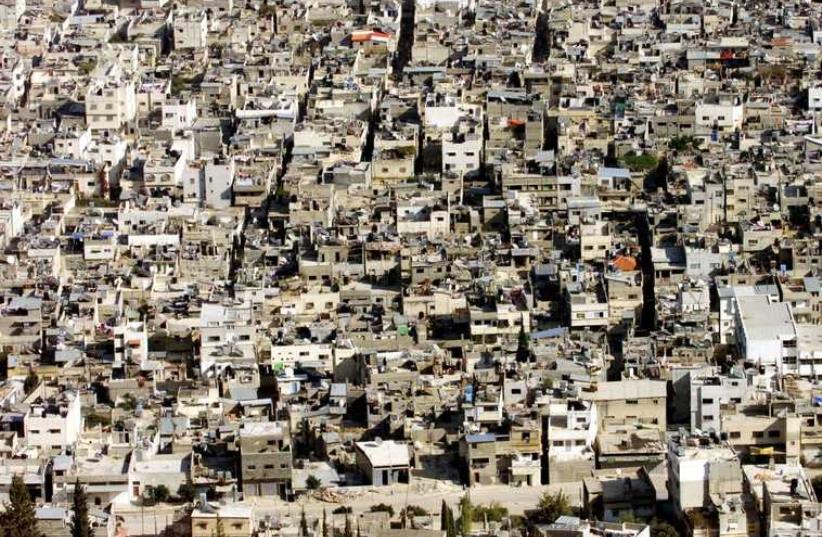 Hilltop view of the Palestinian refugee camp Balata on the edge of the West Bank city of Nablus
(photo credit: REUTERS)
Advertisement
PA Nablus Governor Akram Rajoub appealed to the residents of the Balata refugee camp on Sunday to help the PA arrest suspects in the camp, which has become a center of anti-PA sentiment.“He who wishes to help end the problem of the law violators in the camp will be fully supported and we will lock hands with him,” Rajoub said in a press release obtained by The Jerusalem Post. “We welcome all sincere and well-intentioned efforts to... restore normalcy to the camp.”Approximately 2,000 PA security forces entered Balata twice in the last ten days to arrest suspects. On both occasions, the security forces encountered armed resistance from residents and withdrew after hours of exchanging fire with them.Rajoub added that the PA security forces solely intend to arrest suspects. “We emphasize to everyone that our security activity in Balata is targeting the law violators and people accused of killing innocent citizens,” Rajoub stated.Rajoub did not clarify the exact circumstances of the alleged crimes and number of suspects.Meanwhile, local leaders in Balata hold that the PA should not use force to deal with the situation in the camp. A local leader, who spoke to the Post on the condition of anonymity, said, “There are other ways to resolve these issues; the PA can seek alternatives other than force.”In previous conflicts, the PA and local leaders negotiated agreements to have suspects turn themselves over to the PA.Rajoub also apologized for damage PA security forces did to residents’ property. “Regarding the damages and disturbances that accompanied the security activity, I apologize,” Rajoub said, adding that he apologizes for any future damage and disturbances as well.Balata has long suffered from neglect and widespread poverty, for which many of its residents hold the PA accountable.