So far, five civilians have been killed in the fighting with 20 others wounded. 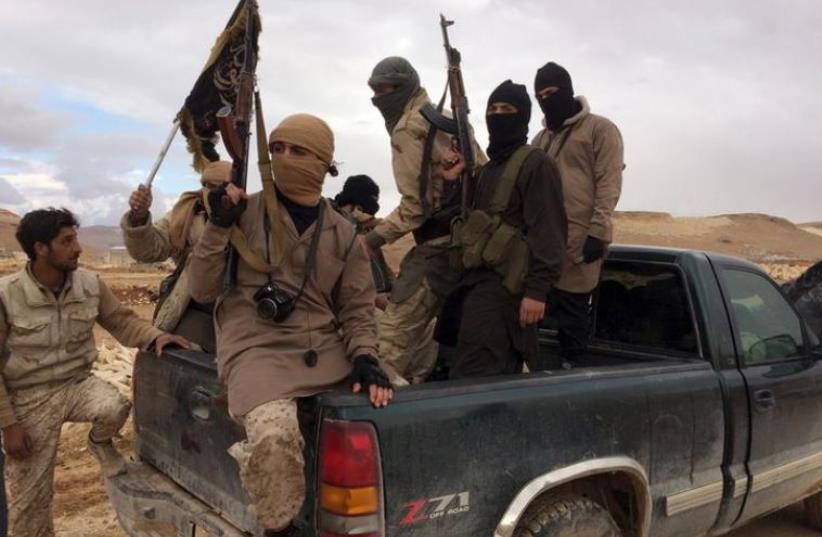 Al-Qaida militants.
(photo credit: REUTERS)
Advertisement
Members of the world's two most notorious Islamic fundamentalist groups have been clashing in recent weeks at a Palestinian refugee camp in Damascus, AFP reported Friday.A senior Palestinian official claimed that Islamic State and their chief rival al-Qaida have been fighting over the past two weeks inside the Yarmuk refugee camp located on the outskirts of the Syrian capital, with ISIS now in almost complete control of the area."[Islamic State] has chased Al-Nusra, its former ally in the Yarmuk camp, from 90 percent of the territory it controlled," the Palestine Liberation Organization chief in Damascus, Anwar Abdel Hadi, told AFP. Al-Qaida members fighting in Damascus are known as Al-Nusra Front or Jabhat al-Nusra.So far, five civilians have been killed in the fighting with another 20 wounded, according to Abdel Hadi. There were no reports on how many jihadists on either side have been killed in the clashes, he added.In April 2015,  ISIS and al-Qaida controlled 70 percent of the Yarmuk refugee camp. Yet, one year later most of the 160,000 residents of Yarmuk have fled, leaving only 6,000 Palestinian civilians behind along with 3,000 ISIS fighters. An estimated 300 al-Qaida members also inhabit the camp, according to AFP.Abdel Hadi noted that Palestinian factions and pro-government forces have refrained from taking part in the jihadi conflagrations. A spokesman for UNRWA, the United Nations agency established to aid Palestinian refugees, said Thursday that the "residents in Yarmuk remained trapped" and "humanitarian conditions are dire.""UNRWA remains concerned about reports on the lack of access to fresh water," Chris Gunness told AFP.