ISIS claims the military officials named were directly involved in attacks in Syria and Iraq. 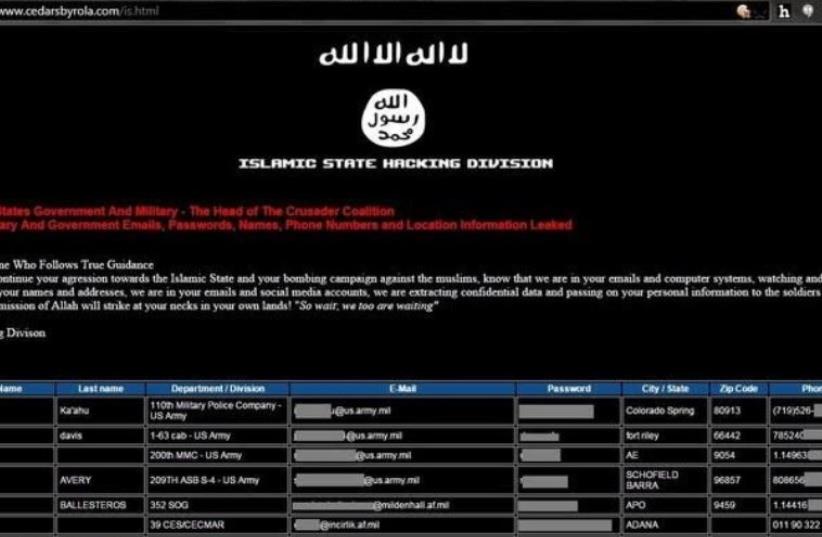 Screenshot of threat published by the Islamic State Hacking Division to the US military
(photo credit: screenshot)
Advertisement
The Pentagon is on alert following the publication of the names of several high ranking American military officials on the latest Islamic State "hit list."Hackers affiliated with the Islamic State Hacking Division posted details of more than 70 American military personnel including their full names, addresses, phone numbers, emails and photographs on the Internet, claiming that the officials named were directly involved in attacks on Syria and Iraq. Topping the list of names is Lieutenant Sean McFarland, the commander of the coalition forces in Syria."As you continue your aggression towards the Islamic State and your bombing campaign against Muslims, know that we are in your e-mails and computer systems, watching and recording your every move," read the warning to the US military officials. "We have your names and addresses, we are in your e-mails and social media accounts, we are extracting confidential data and passing on the information to the soldiers of khalafah (caliphate) who soon, with the permission of Allah, will strike at your necks in your own lands!""Kill them wherever they may be. Knock on the doors of their homes, cut off their heads, stab them, shoot them in the face or blow them up," the message urged the terrorist organization's operatives."We know that ISIS and other organizations are claiming they have uploaded the names of American soldiers and members of the coalitions against their organization," said Pentagon spokesperson Adrian Galloway. "We are doing everything it takes to keep our soldiers and their families safe and we are keeping them updated regarding every security change."Galloway refused to comment on whether or not the list was accurate but stressed that "it will not affect military operations against ISIS."