Pride Month falls during Ramadan, which has made it difficult to organize some events. 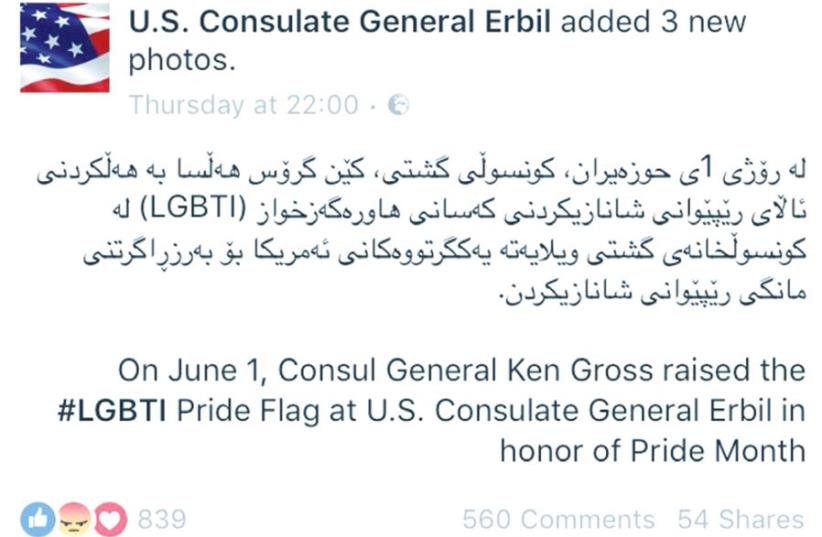 US CONSUL-GENERAL Ken Gross raises the LGBT flag in Erbil, in the autonomous Kurdistan region of Iraq, last Thursday
(photo credit: FACEBOOK SCREENSHOT)
Advertisement
On June 1, US Consul-General Ken Gross raised the LGBT flag in Erbil, in the autonomous Kurdistan region of Iraq, where it fluttered beneath the US flag in the consulate compound.The consulate received a lively amount of feedback when it posted the photos on Facebook, but Gross stuck by his decision, saying the US supports the human rights of all people and noting it was the second year in a row the consulate had raised the flag.Across the Middle East, Pride Month, which has been celebrated annually in the United States and elsewhere for more than a decade, has faced an uphill battle for acceptance. Most countries in the region criminalize homosexuality, and gay men have been arrested and imprisoned. Outside of Israel, where Tel Aviv marks the month with numerous events, there are few recognized events.In Turkey, in June 2016, gay pride events were prohibited and the banned parade was met with rubber bullets; in 2013, the parade had attracted 100,00 in Istanbul and, in 2014, four mayors had signed an LGBT-friendly protocol.Things there have gone down hill since amid increasing authoritarianism. This year, Pride Month falls during Ramadan, which has made it difficult to organize some events. According to an article in Slate magazine, a small organization in Mersin, Turkey, is organizing pride events for a third year.In Lebanon, Beirut marked Pride Month for the first time this year with a series of small events.Activists told CNN they were seeking to normalize being gay, not advance gay rights such as marriage.“This is definitely a big milestone,” Diana Abou Abbas told CNN.Not all of Lebanon’s first pride events went well, however. According to reports, one group, Proud Lebanon, had to cancel an event because of threats from Islamist groups.In Tunisia, which like Turkey has a history of secularism, gay rights are controversial. Shams, a gay rights group, received official recognition in 2015, but authorities tried to ban it though courts overturned the ban in 2016.It now seeks to mark a major legal hurdle, decriminalizing homosexuality. Tunisia is one of 76 countries, most of which are in the Middle East, South and Central Asia and North Africa, where homosexuality is illegal.In the Kurdistan region of Iraq, the decision of the US consul to raise the pride flag was part of an initiative whereby the Department of State says it has “issued guidance to embassies and consulates allowing them to, as appropriate to their local context, recognize LGBT Pride Month.”However, Habib al-Tarfi, an Iraqi parliamentarian, was quoted by the Iraq News website as saying the act was “shameful [in] a religious Iraqi province during the holy month of Ramadan.”According to the report, the lawmaker said he would have burned the consulate if it happened in his area. Tarfi is a member of the Supreme Islamic Council, a Shi’a political party allied with Iran.Zach Huff, Kurdish region analyst and minority rights activist, said that while the culture is conservative in Kurdistan, “Kurds are proud of their egalitarian approach to gender equality” and the “government does not actively seek to interfere in people’s personal relationships.”