In an address to the Egyptian people this week, Francis said he hoped his visit would help bring peace and encourage dialog and reconciliation with the Islamic world. 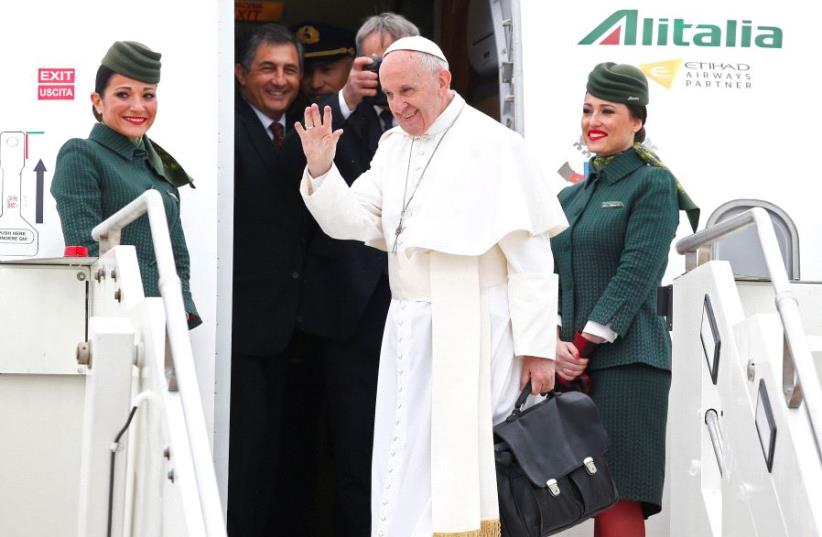 Pope Francis waves as he leaves for his pastoral trip to Egypt at the Leonardo da Vinci-Fiumicino Airport in Rome, Italy, April 28, 2017
(photo credit: REUTERS)
Advertisement
CAIRO - Pope Francis arrived in Cairo on Friday hoping to mend ties with Muslim leaders just as Egypt's ancient Christian community faces unprecedented pressure from Islamic State militants who have threatened to wipe it out.In an address to the Egyptian people this week, Francis said he hoped his visit would help bring peace and encourage dialog and reconciliation with the Islamic world.But it comes at a painful time for Egypt's Copts, the Middle East's largest Christian community, three weeks after Islamic State suicide bombers killed 45 people in twin church bombings.Those attacks followed a cathedral bombing that killed 28 people in December and a spree of murders that has forced hundreds of Christians to flee North Sinai, where the group is most active."Pope of Peace in Egypt of Peace," read posters plastered along the road leading from the airport to central Cairo, showing a smiling pope, his hand raised above the Christian cross and the Crescent moon of Islam.Military Humvees patrolled the streets and soldiers guarded routes the pope will take. As on other foreign visits, Pope Francis will shun armored limousines during his 27-hour stay and use a normal car, saying this lets him be nearer the people.Streets close to the Vatican embassy in Cairo and other sites have been cleared of cars and blocked off, and pedestrians were not allowed to linger."After all the pain we have experienced ... we are satisfied and confident that the state is taking strong security measures to prevent terrorism and protect churches," said Father Boulos Halim, spokesman of the Coptic Orthodox church to which the majority of Egypt's Christians belong."It's in the state's interests to protect its nationals and the Copts are not an independent people, they are part and parcel of the nation itself."STRAINED RELATIONSFrancis will meet President Abdel Fattah al-Sisi; Sheikh Ahmed al-Tayeb, the Grand Imam of al-Azhar, the world's most influential seat of Sunni Islamic theology and learning; and Pope Tawadros II, head of the Coptic Orthodox Church who narrowly escaped a church bombing in Alexandria on Palm Sunday.Francis is expected to give his key address to a conference on religious dialog at Al-Azhar, part of efforts to improve relations with the 1,000-year-old center after Egyptian Muslim leaders cut ties in 2011 over what they said were repeated insults against Islam by Pope Benedict.Tayeb visited the Vatican last year after restoring relations. Widely considered among the most moderate clerics in Egypt, Tayeb has condemned Islamic State and its practice of declaring others as infidels as a pretext for waging jihad.Francis denounces violence in God's name and papal aides say a moderate like Tayeb would be an important ally in condemning radical Islam.But Tayeb is under fire over the slow pace of reform at Azhar, which critics in Egypt's parliament and media accuse of failing to combat the religious foundations of Islamist extremism. They say Azhar is an ossified institution whose clerics have resisted pressure from Sisi to modernize their religious discourse.