The besieged militants include fighters of Islamic State and the Nusra Front, al-Qaida's offshoot in Syria. 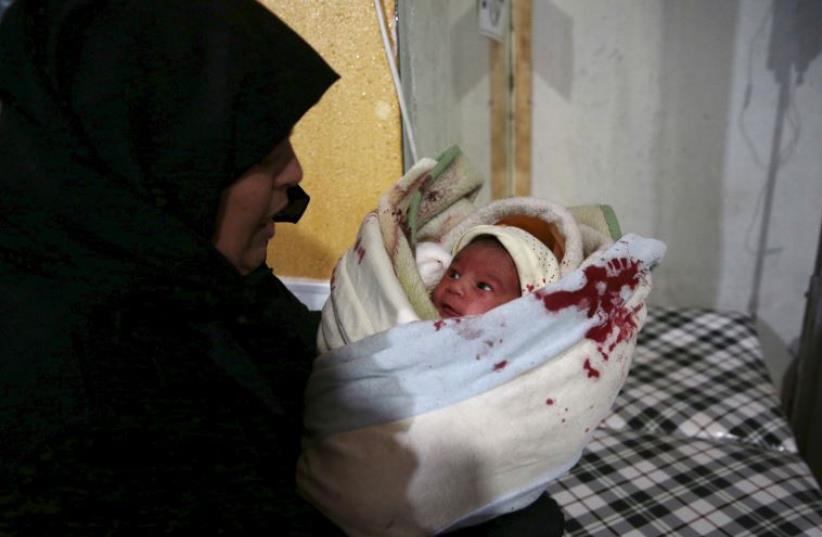 A woman carries an injured baby born inside a field hospital after what activists said were air and missile strikes in the Douma neighborhood of Damascus
(photo credit: REUTERS)
Advertisement
Two thousand Syrian Islamist fighters are expected to be evacuated soon from besieged, rebel-held areas of southern Damascus in a deal brokered by the United Nations, a Hezbollah TV station said on Friday.The deal marks a success for the government of President Bashar Assad, increasing its chances of reasserting control over a strategic area just 4 km (2.5 miles) south of the center of the capital.It also highlights the increasing efforts of the UN and foreign governments to bring about local ceasefires and safe-passage agreements as steps towards the wider goal of ending Syria's civil war, in which more than 250,000 people have been killed in nearly five years of fighting.The besieged militants include fighters of Islamic State and the Nusra Front, al-Qaida's offshoot in Syria. Hezbollah's Manar TV said 18 buses had arrived to start taking them and 1,500 family members to areas under the control of IS and other rebel groups. It was not clear whether the buses were provided by the UN or by the Syrian army.The rebels' capitulation was forced by a government siege over several years that squeezed the flow of food and humanitarian aid, starving many people to death in what rights group Amnesty International has described as war crimes.Manar said the fighters would also be handing in their heavy weapons to the Syrian army under what it said was a multi-party deal under UN auspices.Manar is the official mouthpiece of Hezbollah, a Lebanese Shi'ite group which is a major ally of Assad and has sent its forces to fight alongside government troops.It later said the evacuation "awaited completion of some arrangements."Separately, the Syrian army said on Friday it had fought its way close to the strategic, rebel-held Aleppo-Damascus highway - its latest gain in a major offensive supported by Iranian-backed Shi'ite militias and Russian air power.The government and its allies are pressing towards the northwestern province of Idlib, which borders Turkey and is controlled by a coalition of Islamist groupings called Jaish al Fateh. Its capture would deal a major blow to the insurgents, who have been losing ground since Russia launched its aerial bombing campaign in support of the Assad government on Sept. 30.In a separate development, a British-based monitoring group said the last of some 200 Nusra Front fighters operating in Deraa province in the south had been given safe passage by the Syrian authorities to leave for rebel-controlled Idlib.Damascus agreed to the move in return for the release of Iranian officers captured by Nusra while fighting alongside the Syrian army, said Rami Abdulrahman, head of the Syrian Observatory for Human Rights. The south Damascus and Deraa deals followed an earlier local truce in Zabadani on the Lebanese border, and an agreement allowing rebels to leave a besieged part of the city of Homs, which the UN said could help pave the way for a nationwide truce. The UN Security Council on Dec. 18 unanimously approved a resolution endorsing an international road map for a Syrian peace process, a rare show of consensus among major powers.Syrian Foreign Minister Walid al-Moualem said on Thursday that Damascus was ready to take part in peace talks in Geneva and hoped that the dialogue would help it form a national unity government. The UN plans to convene the Geneva talks towards the end of January.