Israeli communications company Spacecom successfully launched a state-of-the-art satellite into space on Saturday night from the Zenit launching pad in Baikonur, Kazakhstan, it was announced on Sunday.Amos 4, which was built by Israel Aerospace Industries, was dispatched at 11:05 p.m. Saturday, and the launch concluded in the early hours on Sunday when the satellite disconnected from the final part of its launcher.Prime Minister Binyamin Netanyahu praised the launch at the weekly cabinet meeting on Sunday morning.“I would like to take this opportunity to congratulate Israel Aerospace Industries and the Spacecom Satellite Communications Ltd. for the successful launch of the Amos 4 satellite,” Netanyahu said. “There are very few countries in the world that can congratulate themselves on such an achievement.”Amos 4 is expected to take two weeks to reach its designated orbital position 67.25°E at an altitude of 36,000 kilometers.The satellite is to remain at that orbital position for several months and in orbit tests are to be performed on its systems.Following these tests the satellite is expected to move to orbital position 65°E where it would provide a full range of satellite services for Russia, the Middle East and additional service areas.The satellite will provide services such as direct-to-home video distribution, VSAT communications and broadband Internet, according to Spacecom’s website. 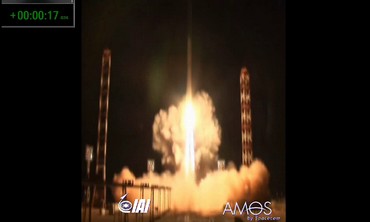 Science and Technology Minister Yaakov Peri, who watched the launch from a secure location in Israel, expressed pride at the launch and stressed that space and cyber technologies are “critical issues for the security of Israel.”“The Israeli space agency is expanding its activity substantially, and the launching of this satellite is another landmark in the course the State of Israel has set out on – entering the top five leading countries in the field,” he said. “This is a true Israeli pride that proves to us, once more, that for Israeli technology – the sky is no longer the limit.”Amos 4 is Spacecom’s fifth satellite sent to space. Amos 6 is scheduled for a 2014 launch.
Advertisement
Subscribe for our daily newsletter