Putin: We respect Israel's interests, but are concerned over its attacks on Syria

Obama and Putin meet on sidelines of UNGA and agree that their armed forces should hold talks to avoid coming into conflict in Syria. 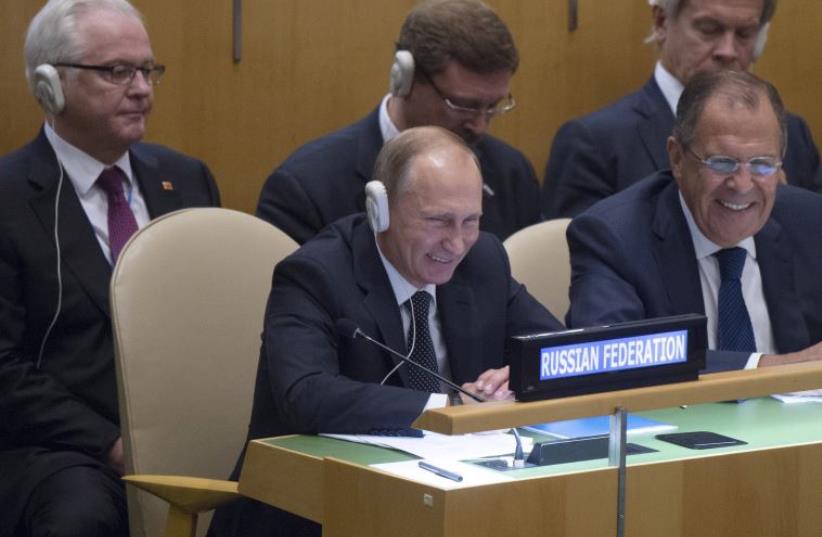 Russian President Vladimir Putin (L, front), Foreign Minister Sergei Lavrov (R, front), and members of the Russian delegation at the UNGA, September 28, 2015.
(photo credit: REUTERS)
Advertisement
Following a 90-minute meeting on Monday with US President Barack Obama on the conflict in Syria, Russian President Vladimir Putin said he was concerned with Israel's Sunday strike on Syria, that was prompted by cross-border fire originating from Syrian army positions. "We respect Israel's interests related to the Syrian civil war but we are concerned about its attacks on Syria," Putin said, according to Army Radio.  The Syrian projectile exploded in an unpopulated area of the northern Golan Heights, causing no injuries or damage.In the meeting of the sidelines of the UN General Assembly in New York, Russia and the United States agreed on Monday to look for a diplomatic end to the Syrian civil war but clashed over the central question of whether Syrian President Bashar Assad should retain power.During the meeting Obama and Putin agreed that their armed forces should hold talks to avoid coming into conflict in Syria after a Russian military buildup there over the last several weeks.  Defense Minister Moshe Ya’alon said Syrian civil war battles were behind the stray fire into Israel on Saturday and Sunday. “From our perspective this is a violation of sovereignty and a crossing of a red line. The State of Israel has no intention of ignoring such incidents, and the IDF therefore attacked two Syrian army artillery positions this evening,” Ya’alon said.“We view the Syrian regime and its army as being responsible for what happens in their territory and we will not be tolerant in cases such as these,” the defense minister said.Yaakov Lappin contributed to this report.