Diplomatic source says that a lack of coordination between Bashar Assad's troops and supporting forces could lead to future instability. 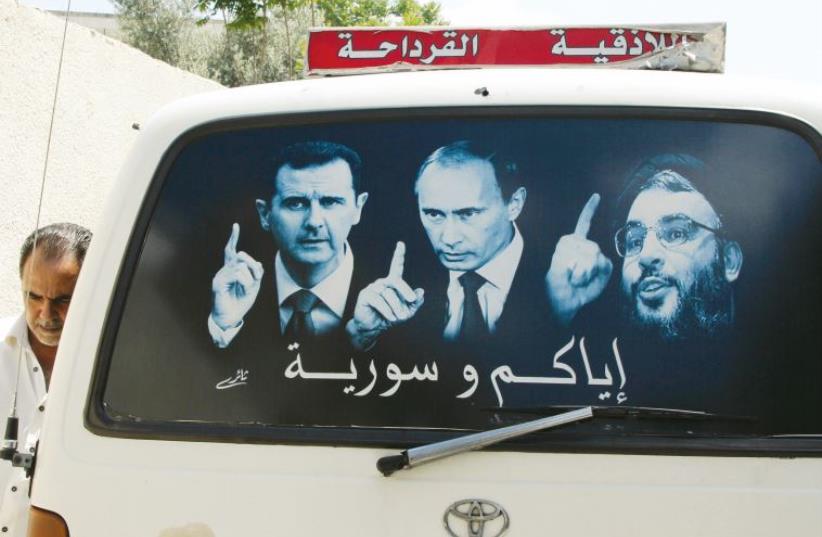 A poster shows Assad, Russian President Vladimir Putin and Lebanese Hezbollah leader Sayyed Hassan Nasrallah near Latakia city in 2014
(photo credit: REUTERS)
Advertisement
Dozens of members of Hezbollah were killed last week in Aleppo in an "accidental" chemical attack carried out by the Syrian military, diplomatic sources reported to the Kuwaiti newspaper "Al-Jarida."The report stated that Syrian fighter jets struck militants from the Shi'ite terror group when they mistakenly attacked the town of Al-Eis, south of Aleppo, in their efforts to retake the region.On the bodies of the dead militants were signs of burns that are typical of chemical explosives."It is not the first time that coordination problems have arisen between the military police and the Russian military, Hezbollah and Iran. Incidents like this have happened repeatedly since the Russian forces entered into the conflict," a diplomatic source said.The source added that, "What happened in Aleppo demonstrates an impending problem in regards to cooperation on the ground and the incident again brings up the issue of attacks on innocent people with unconventional weapons."The source continued to say, "The lack of coordination between the supporting forces and Syrian President Bashar Assad's forces is troubling to Russian President Vladimir Putin, who was not updated about the incident."The source elaborated that this lack of coordination is particularly troublesome because it is one that caused Putin to announce the withdrawal of ground troops from Syria.