According to Army Radio report, a third-party country sent a messenger to Jerusalem to request diplomatic support for Tripoli on behalf of the former Libyan leader facing a coup some 5 years ago. 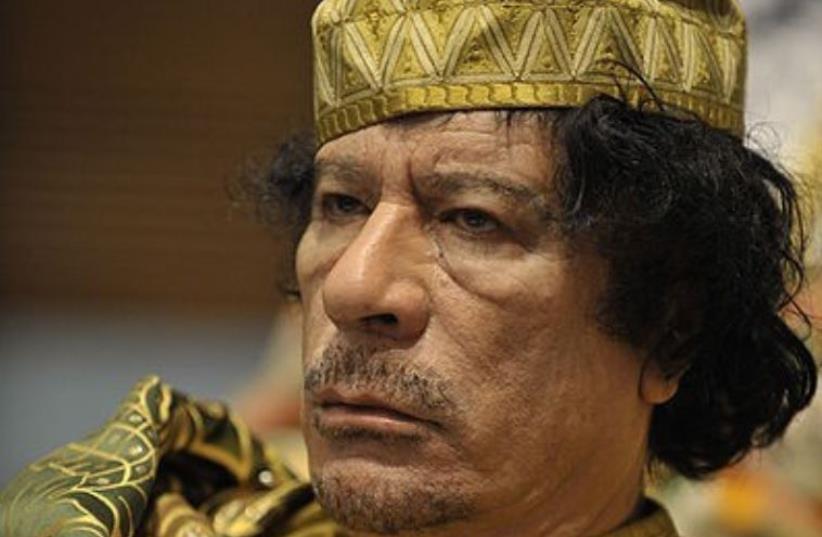 Muammar Gaddafi
(photo credit: WIKIMEDIA COMMONS/US NAVY/JESSE B. AWALT)
Advertisement
Former Libyan dictator Muammar Gaddafi requested help from Israel amid the revolt against him five years ago, Army Radio reported on Wednesday. According to the report, a third-party country sent a messenger to Jerusalem at an unspecified date to request diplomatic support for Tripoli. In the message relayed from the later slain Libyan leader battling an attempted coup, Israel was said to have been warned that the rebel forces uprising against Gaddafi's four-decade rule could topple the regime and pose a threat to the whole of Europe as well as Libya. The North African oil producer plunged into chaos after rebels ousted dictator Muammar Gaddafi in 2011, backed by British and French air strikes supported by the United States.On Gaddafi's behalf, the messenger cited in the Army Radio report allegedly asked that Israel urge the US and French to take efforts to reign in military action. According to the Army Radio report, Israel quickly assessed the situation and decided against any action. A few months later in October 2011, Gaddafi's government was toppled and the deposed leader was captured and killed by rebel factions.Since 2014 Libya has had two rival governments, one based in the eastern city of Bayda and the other in the capital, Tripoli.Islamist militants, some of whom have sworn allegiance to the Islamic State, have taken advantage of the political chaos to expand their influence in the country.Reuters contributed to this report.