The zoo, which was once a humming venue of school trips and family day visits, is now experiencing hard times due to conflict in the region. 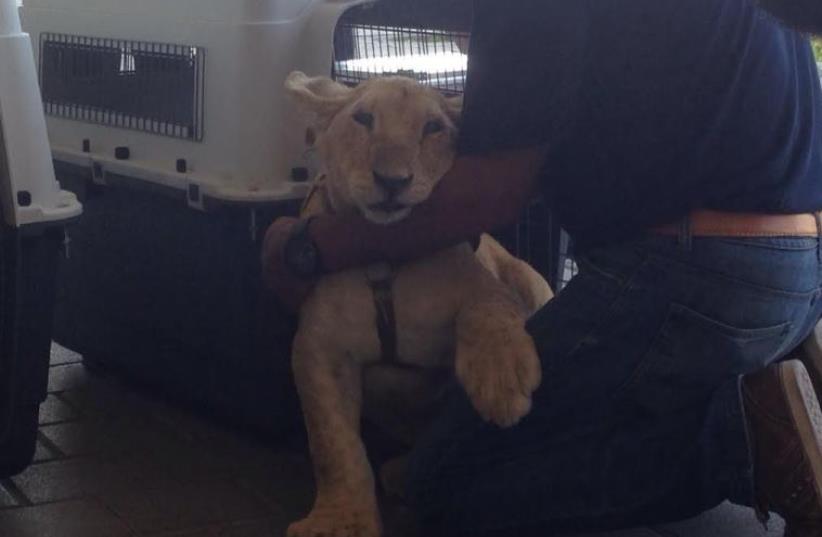 One of the lion cubs transferred from Gaza, though Israel, to make its new home in Jordan
(photo credit: ADMINISTRATION OF BORDER CROSSINGS)
Advertisement
Years of conflict and negligence have left most of the animals in the destitute Gaza Zoo dead or in poor healthn, Internet publication US News reported Saturday. The zoo, which was once a humming venue of school trips and family day visits, is now experiencing hard times due to conflict in the region."I swear to God the tiger has not eaten for four or five days," said Mohammed Ouida, the owner of South Jungle Zoo. "It needs 100 shekels (about $20) of food a day." Since December, a wildcat, two monkeys and a falcon have perished as a result of poor conditions. Additionally, the zoo was forced to surrender lion cubs to Jordan after concern that the zoo's management could not adequately care for them.The animals that have not died off due to disease or starvation have struggled to survive in cramped enclosures riddled with bullet-holes that barely afford animals enough room to turn around, according to Vice News.The owner has even resorted to a primitive taxidermy technique in order to maintain the facade of the zoo, a craft he learned by "reading the internet," Vice News added. Even prior to the worsening foreign relations with former ally Egypt and the enduring conflict with Israel, there was little attention paid to animal welfare in Gaza. The zoo staff is improperly trained to care for exotic animals and Hamas has imposed a three shekel cap on the entrance fee, Vice News noted. Ouida, wearied by the bleak conditions in Gaza, said he would appreciate aid. "I'm waiting for someone to buy the zoo or for the animals to die," he remarked.