A former US lawmaker co-authored a report in which he states that his team met with a number of Israeli defense and security analysts in recent weeks. 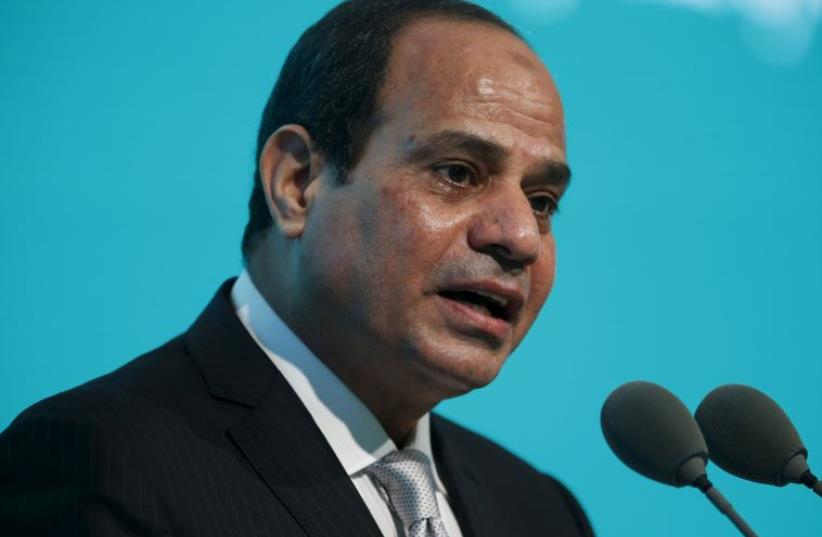 Egyptian President Abdel Fattah al-Sisi
(photo credit: REUTERS)
Advertisement
Israeli officials are reportedly growing concerned over the long-term viability of the current Egyptian regime in light of gains made by Islamists in their insurgency.Bloomberg News quoted a former Republican lawmaker on Friday as saying that Israeli government figures are beginning to wonder whether Egypt's president, Abdel Fattah al-Sisi, can successfully overcome the threats posed to his rule by Islamic State-inspired Salafist gunmen.Egypt's tourism industry - a key source of revenue for the cash-strapped Arab giant - is expected to take an even bigger hit in the wake of Saturday's crash of a Russian airline in the Sinai Peninsula. All 224 passengers on board were killed in what Western intelligence agencies say may have been a terrorist bomb."We encountered a lot of people in Israel and elsewhere that don't think that he is going to survive his term," Vin Weber, a former Republican member of Congress, told Bloomberg. Weber is currently the co-chairman of the Egypt policy task force of the Washington Institute for Near East Policy.The think tank released a report co-authored by Weber in which he states that his team met with a number of Israeli defense and security analysts in recent weeks.According to the report, Weber's interlocutors paint a bleak picture of Sisi's current standing in Cairo."[Sisi] is under constant death threats," Weber told Bloomberg. "Many people said we're not sure where he sleeps every night. And I think there is that question mark in the minds of the Israelis about whether or not the government can succeed."An insurgency based in Sinai and mounted by Islamic State's Egyptian affiliate has killed hundreds of soldiers and police. In recent months, it has expanded to Western targets in Egypt.The Islamist insurgency gained pace after Egypt's military, under Sisi's command, overthrew President Mohamed Morsi of the Muslim Brotherhood Islamist movement in mid-2013 in the wake of mass protests against his rule.Islamic State controls large parts of Iraq and Syria, has a presence in Libya and the support of militants in Egypt seeking to topple the Cairo government.Sisi has described Islamist militancy as an existential threat to Egypt, the most populous Arab state and a close US ally.Weber's co-chair in heading the task force, Greg Craig, told Bloomberg that while Egyptian-Israeli security cooperation in the Sinai has never been better - particularly since the 2014 Israeli military offensive against Hamas in the Gaza Strip - Jerusalem gives the former general low marks in the manner in which he has tried to crush the Islamist uprising."We did spend some time with Israeli national security folks," said Craig, a former Obama administration official. "One of the smartest persons I've ever met in terms of analytical capacity was talking about the Egyptian proclivity to do all the wrong things when it comes to counter-insurgency.""If you had a list of boxes you checked of things not to do, the Egyptian military has checked every one of those boxes," Craig said.Sisi has reportedly acknowledged that Islamists have tried to assassinate him on at least two occasions. Remarkably, though, there is now concern that the Egyptian president has enemies within the ranks of the military.This past August, 26 Egyptian officers were sentenced to jail by a military court for allegedly plotting to overthrow Sisi.