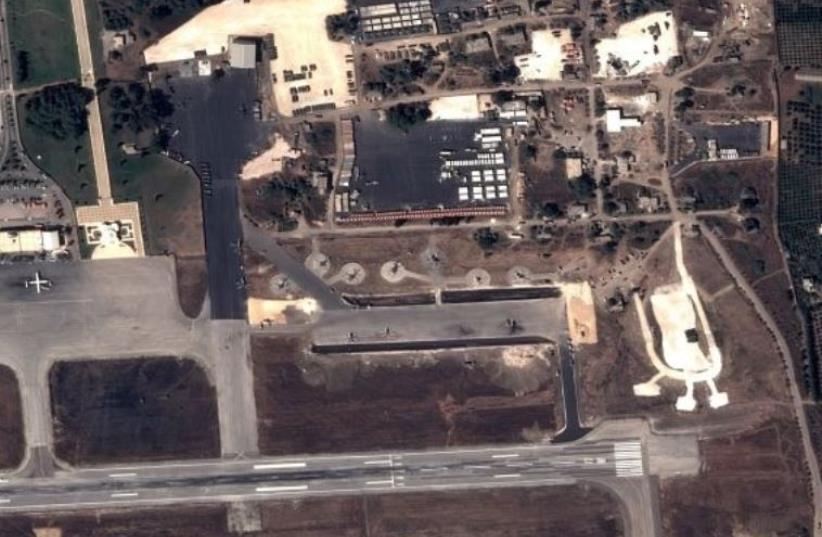 Image by Pleiades Satellite shows Russian fighter jets and helicopters at a military base in the Syrian government-controlled port of Latakia
(photo credit: AFP PHOTO)
Advertisement
Russia has reportedly breached multiple UN Security Council resolutions imposing an arms embargo on Iran by assisting in the recent transport of weapons from the Islamic Republic to embattled Syria, Fox News reported on Wednesday. The report cited western intelligence sources saying Russian cargo planes have twice daily over the past 10 days delivered Iranian weapons shipments to Syria, where civil war has raged for more than four years. Russian aircrafts have reportedly been seen recently at a Russian air base in the Syrian port city of Latakia.According to the Fox report, the consignments were arranged by the head of Iran's Revolutionary Guards' Al-Quds force, Qassem Soleimani, and Russian President Vladimir Putin along with Russia Defense Minister Sergei Shoigu.The flights were unregistered and therefore impeded upon two United Nations Security Council resolutions sanctioning Iran, Fox reported.Syria's main allies are Russia and Iran, both of whom say President Bashar Assad must be part of any political transition in the country.Fighters from Iran and its Lebanese ally Hezbollah are currently taking part in ground offensives being waged by the Syrian army and its allies with Russian air support.Revolutionary Guards Deputy Commander Hossein Salami said in an interview on state TV on Monday that Iran had increased its military presence in Syria in recent months to help its army in response to a request from the Assad government.Russia has been mounting air strikes in Syria in support of its military since September 30.