According to Kuwaiti reports, following investigations of its prosecutor, the STL is to accuse the organization of Hezbollah of assassinating Hariri, while previously trying Hezbollah members. 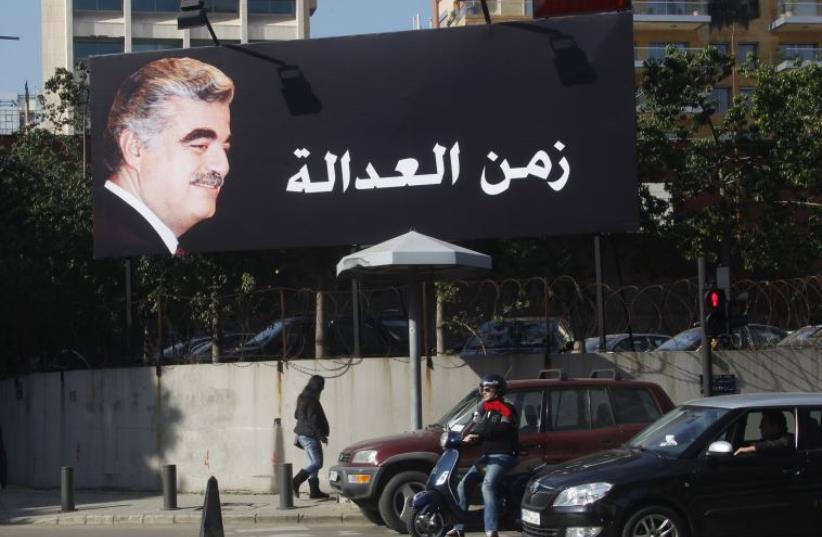 A billboard of former Prime Minister Rafik al-Hariri is displayed along a street in Beirut
(photo credit: REUTERS)
Advertisement
The Special Tribunal for Lebanon (STL) is reportedly set to accuse Hezbollah of the 2005 assassination of former Lebanese Prime Minister Rafik Hariri, as opposed to its original decision to try only four individual members of the terrorist organization for their role in the murder.Diplomatic sources told the Kuwaiti newspaper al-Anba Monday that the STL has decided to revise its indictment due to additional evidence uncovered by the Special Tribunal prosecutor, which indicated that Hariri’s assassination was the result of central planning and not a private decision made by individual senior members of the Shi’ite terrorist group.No official announcement has been made by the STL confirming the al-Anba report, and the STL did not respond to an inquiry on the issue.The Lebanese tribunal started operating on January 16, 2014, trying in absentia four senior Hezbollah members for their involvement in the central Beirut car bombing.According to Lebanese daily al-Akhbar, the Special Tribunal’s prosecutor is currently focused on pinpointing who within Hezbollah ordered the massive car bombing, which was detonated as Hariri’s motorcade drove past the St.George Hotel on February 14, 2005, killing 21 people including the Sunni PM.Serving as Hezbollah’s secretary- general at the time of Hariri’s assassination, Hassan Nasrallah may be a target of the broadened investigation.The Hariri murder trial got under way in January 2014, garnering international interest.Broadcast in English, Arabic and French, it involved dozen of lawyers, all of who made opening remarks.Initially, four defendants were indicted in absentia – Mustafa Amine Badreddine (a relative of the killed notorious Hezbollah commander Imad Mughniyeh), Salim Ayyash, Hussein Hassab Oneissi and Sassad Hassan Sabra. Hassan Habib Merhi was subsequently added as a fifth accused.There have always been suspicions of Syrian involvement in the Hariri assassination.The prosecution maintains the Hezbollah operatives attacked Hariri at the behest of Damascus, because of the Lebanese PM’s pursuit of policies independent of Syria.The trial has divided Lebanon, pitting the country’s Shi’ites and Sunnis against one another in a region where the two sides have been at loggerheads or outright war for decades.Until November 2014, the prosecution had carefully steered clear of accusations against Syria, trying to avoid further controversy and diplomatic opposition from Syria’s supporters.The STL court is an international tribunal established on March 1, 2009, with headquarters in The Hague as well as an office in Beirut.