Russia complains to US over exclusion from Syria chemical probe

Trump said last week that relations with Moscow "may be at an all-time low." 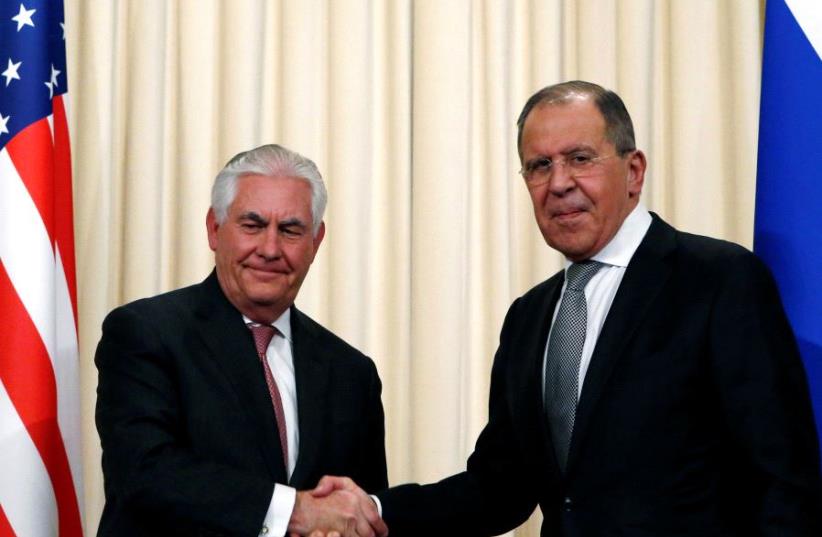 Russian Foreign Minister Sergei Lavrov shakes hands with US Secretary of State Rex Tillerson during a news conference following their talks in Moscow, Russia, April 12, 2017.
(photo credit: REUTERS)
Advertisement
MOSCOW - Russia has told the United States it regrets Washington's opposition to letting its inspectors take part in an investigation into a chemical weapons attack in Syria earlier this month, the foreign ministry said on Friday.It said Foreign Minister Sergei Lavrov spoke by phone to US Secretary of State Rex Tillerson and the two sides agreed to consider one more time an "objective investigation into the incident" under the aegis of the Organization for the Prohibition of Chemical Weapons (OPCW).The US State Department said that during the call Tillerson reiterated to Lavrov his support for the OPCW's existing investigative mechanism. They also discussed a range of issues, including those covered during Tillerson's April 11-12 visit to Moscow, the department said in a statement.
Tillerson: US hopes Russia will abandon Syria"s Assad
The United States accused the Syrian army of carrying out the April 4 attack in which scores of people died from poison gas, and it responded by launching cruise missiles against a Syrian air base.Russia has defended its ally Damascus and blamed the incident on rebels fighting the government of President Bashar Assad.The episode added to a long list of disputes between the two countries and has dashed Russian hopes that ties might improve with Donald Trump in the White House. Trump said last week that relations with Moscow "may be at an all-time low."Referring to another irritant in the relationship, the Russian ministry said Lavrov called on Tillerson to hand back "Russian diplomatic property in the USA unlawfully confiscated by the Barack Obama administration."Former President Obama expelled 35 suspected Russian spies in December and ordered the Russians to depart two countryside vacation retreats outside Washington and New York that he said were linked to espionage. The ministry said the parties had agreed to launch a working group soon "to seek ways to get rid of irritants in bilateral relations."