Russian jets have been striking rebel and jihadi fighters for four months in Syria, including Islamic State militants as well as fighters backed by Turkey and Gulf Arab states. 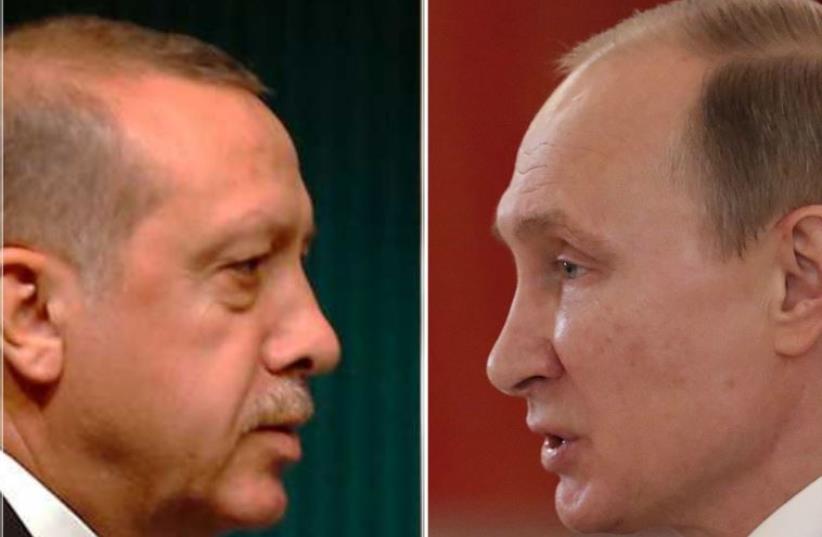 Erdogan vs. Putin
(photo credit: REUTERS)
Advertisement
Russia has serious grounds to suspect Turkey of preparing for a military incursion in Syria, where Russian jets are bombing rebel and jihadi fighters, Defense Ministry spokesman Igor Konashenkov said on Thursday."The Russian Defense Ministry registers a growing number of signs of hidden preparation of the Turkish armed forces for active actions on the territory of Syria," he said in a statement.The ministry also hit out at Turkey's refusal to allow Russia to make an observation in early February over Turkish areas adjacent to Syria, saying "no specific explanation" was given by Ankara."The Russian Defense Ministry regards these actions of the Turkish party as a dangerous precedent and an attempt to hide the illegal military activity near the Syrian border," it said.Turkey's Foreign Ministry said on Thursday that agreement on the observation flight over Turkey requested by Russia under the Treaty on Open Skies could not be reached on the mission plan, so it did not occur.In November Turkish jets shot down a Russian plane flying in Syria, a move described by Russian President Vladimir Putin as a "dastardly stab in the back."Russian jets have been striking rebel and jihadi fighters for four months in Syria, including Islamic State militants as well as fighters backed by Turkey and Gulf Arab states, angering the Turkish government.Konashenkov said Russian aircraft had carried out 237 sorties in Syria over the past three days, hitting 875 "terrorist" targets in the provinces of Aleppo, Latakia, Homs, Hama and Deir al-Zor, Konashenkov said.