At least 805 others were injured in the crush, which took place on Street 204 of the camp city at Mina. 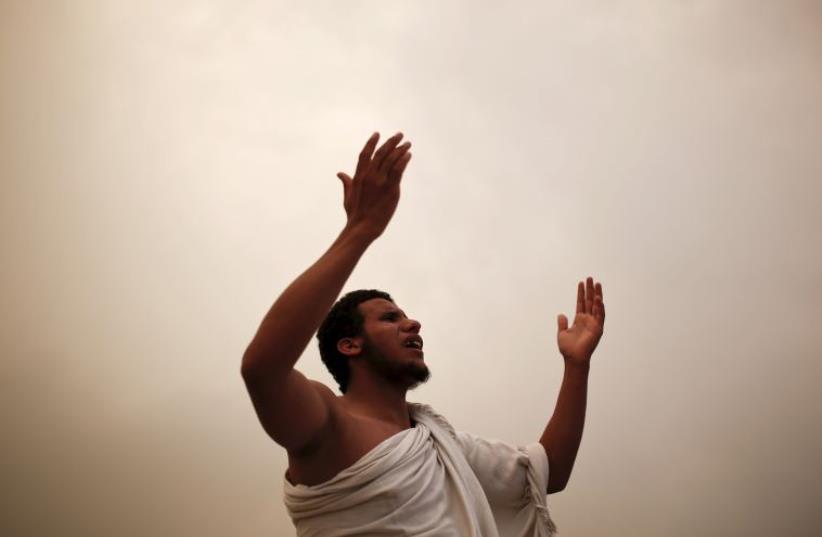 Muslim pilgrims pray on Mount Mercy on the plains of Arafat during the annual haj pilgrimage, outside the holy city of Mecca
(photo credit: REUTERS)
Advertisement
At least 717 pilgrims from around the world were killed on Thursday in a crush outside the Muslim holy city of Mecca, Saudi authorities said, in the worst disaster to strike the annual haj pilgrimage for 25 years.At least 863 others were injured. Saudi King Salman said he had ordered a review of haj plans after the disaster, in which two large groups of pilgrims arrived together at a crossroads in Mina, a few kilometers east of Mecca, on their way to performing the "stoning of the devil" ritual at Jamarat.Thursday's disaster was the worst to occur at the pilgrimage since July 1990, when 1,426 pilgrims suffocated in a tunnel near Mecca. Both incidents occurred on Eid al-Adha (Feast of the Sacrifice), Islam's most important feast and the day of the stoning ritual.Photographs published on the Twitter feed of Saudi civil defense on Thursday showed pilgrims lying on stretchers while emergency workers in high-visibility jackets lifted them into an ambulance.Other images showed bodies of men in white haj garments piled on top of each other. Some corpses bore visible injuries.Unverified video posted on Twitter showed pilgrims and rescue workers trying to revive some victims.The haj, the world's largest annual gathering of people, has been the scene of numerous deadly stampedes, fires and riots in the past, but their frequency has been greatly reduced in recent years as the government spent billions of dollars upgrading and expanding haj infrastructure and crowd control technology.Safety during haj is a politically sensitive issue for the kingdom's ruling Al Saud dynasty, which presents itself internationally as the guardian of orthodox Islam and custodian of its holiest places in Mecca and Medina.BLAMEIran's Supreme Leader, Ayatollah Ali Khamenei, said the Saudi government should accept responsibility for the crush, in which more than 100 Iranian nationals were reported to have died."The Saudi government should accept the responsibility of this sorrowful incident ... Mismanagement and improper actions have caused this catastrophe," Khamenei said in a statement published on his website.King Salman offered deep condolences."We have instructed concerned authorities to review the operations plan ... (and) to raise the level of organization and management to ensure that the guests of God perform their rituals in comfort and ease," the monarch said.The Interior Ministry spokesman, Mansour Turki said the investigation would look into what caused an unusual mass of pilgrims to congregate at the location of the disaster. "The reason for that is not known yet," he told a news conference in Mina.UN Secretary General Ban Ki-moon and the White House offered condolences."The United States expresses its deepest condolences to the families of the hundreds of haj pilgrims killed and hundreds more injured in the heartbreaking stampede in Mina, Kingdom of Saudi Arabia," White House spokesman Ned Price said.Iran's Tasnim and Fars news agencies reported that 125 Iranians were among the dead. Fars reported that Tehran summoned the Saudi charge d'affaires to lodge an official complaint over the disaster.South African Acting President Cyril Ramaphosa extended condolences to families of the victims and said his government was awaiting information about his country's pilgrims.

JAMARATStreet 204, where the crush occurred, is one of two main arteries leading through the camp at Mina to Jamarat, the site where pilgrims ritually stone the devil by hurling pebbles at three large pillars. In 2006, at least 346 pilgrims died in a stampede at Jamarat."Work is under way to separate large groups of people and direct pilgrims to alternative routes," the Saudi Civil Defense said on its Twitter account.It said more than 220 ambulances and 4,000 rescue workers had been sent in to help the injured. Some of the wounded were evacuated by helicopters.An Arab pilgrim who did not want to give his name said he had hoped to perform the stoning ritual later on Thursday afternoon but was now too frightened to risk doing so."I am very tired already and after this I can't go. I will wait for the night and if it not resolved, I will see if maybe somebody else can do it on my behalf," he said.Efforts to improve safety at Jamarat have included enlarging the three pillars and constructing a three-decker bridge around them to increase the area and number of entry and exit points for pilgrims to perform the ritual.More than 100,000 police and thousands of video cameras are also deployed to allow groups to be dispersed before they reach dangerous levels of density."Please pilgrims do not push one another. Please leave from the exit and don't come back by the same route," an officer kept repeating through a loudspeaker at Jamarat.Two weeks ago 110 people died in Mecca's Grand Mosque when a crane working on an expansion project collapsed during a storm and toppled off the roof into the main courtyard, crushing pilgrims underneath.