Among the detainees is Israa al-Ghomgham, whom Saudi activists said was the first woman to possibly face the death penalty for rights-related work. 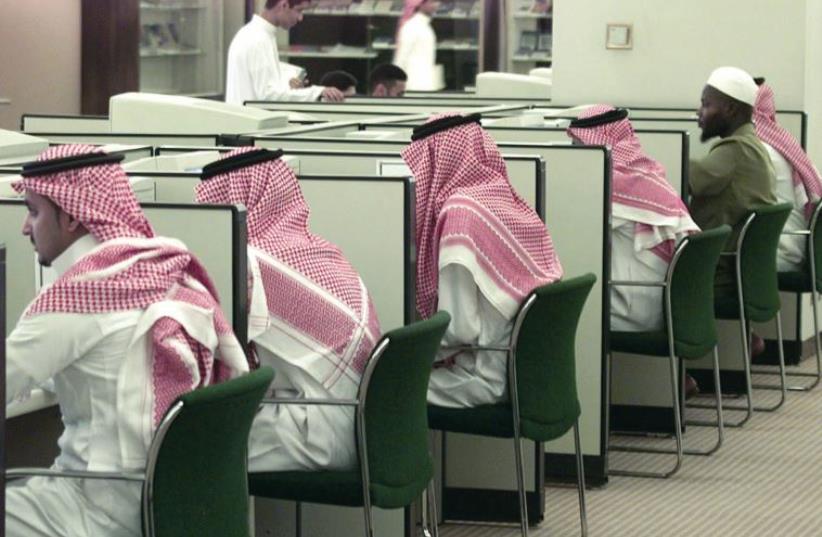 While moving into the future, Saudi Arabia remains far behind in equal rights for women and human rights
(photo credit: MAARIV HAMUSAF)
Advertisement
RIYADH - Saudi Arabia's public prosecutor is seeking the death penalty against five human rights activists from the kingdom's Eastern Province currently on trial in a secretive terrorism court, groups including Human Rights Watch (HRW) said.Among the detainees is Israa al-Ghomgham, whom Saudi activists said was the first woman to possibly face the death penalty for rights-related work. Charges against her include incitement to protest and providing moral support to rioters."Any execution is appalling, but seeking the death penalty for activists like Israa al-Ghomgham, who are not even accused of violent behavior, is monstrous," Sarah Leah Whitson, Middle East director at HRW, said in a statement on Wednesday.ALQST, a London-based Saudi rights group, reported the decision involving Ghomgham's case earlier this week.A government communications office did not immediately respond to a request for comment.Activists said the trial was ongoing, and denied social media reports that the detainees had already been executed.Saudi Arabia, an absolute monarchy where public protests and political parties are banned, has enacted some high-profile social and economic reforms in recent years under powerful young Crown Prince Mohammed bin Salman.They have, however, been accompanied by a crackdown on dissent, with dozens of clerics, intellectuals and activists arrested in the past year, including women who had campaigned for the right to drive in the deeply conservative Muslim country.A roundup of senior royals, ministers and businessmen last November on charges of corruption sent shockwaves through the kingdom, stunning allies and foreign investors. Most of those detainees were released after reaching undisclosed financial settlements with the government.Ghomgham is a prominent Shi'ite Muslim activist who documented mass demonstrations in the Eastern Province starting in 2011. She was arrested from her home in December 2015 along with her husband.Most of the country’s Shi’ite minority lives in the oil-producing Eastern Province and some have complained that their religious ceremonies are banned or interfered with by Sunni authorities, and that they lack opportunities for work and education. The government has denied the charges.Saudi Arabia has previously executed Shi'ite activists on what rights groups called politically-motivated charges. It views protests among Shi'ites in the context of tensions with Shi’ite power and regional rival Iran, which it has accused of fomenting the unrest.The authorities have carried out security operations against suspected Shi'ite militants in the Eastern Province, which has seen unrest and occasional armed attacks for years.