Timepiece that "will dwarf Big Ben" to be unveiled during Ramadan.

By ASSOCIATED PRESS
AUGUST 11, 2010 14:31
Advertisement
RIYADH, Saudi Arabia — Saudi Arabia will test what it is being billed as the world's largest clock in the holy city of Mecca during the Muslim fasting month of Ramadan, the official news agency reported Tuesday.The four-faced clock tower will top a massive skyscraper that when completed will be around 1,970 feet (600 meters) tall, the second tallest in the world after Dubai's Burj Khalifa. 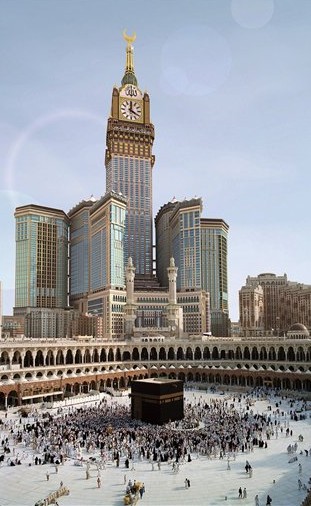 Saudi Arabia
The clock will dwarf London's Big Ben, once the largest four-faced clock in the world, with dials more than five times greater in area.The around 130 foot (40 meter) diameter Saudi clock dials are also bigger than the current world champion at the Cevahir Mall clock in Istanbul, which has a 36 meter face set in the transparent roof of the shopping complex.The complex overlooks Mecca's famed Grand Mosque, which Muslims worldwide face during their five daily prayers and is part of Saudi efforts to develop the city visited by millions of pilgrims every year.A three-month test run for the clock will start during the first week of Ramadan — the month-long period of prayer, reflection and sunrise-to-sunset fasting, the report said. This year, Ramadan will begin Wednesday.Only one of the clock's four faces has so far been completed and is covered with 98 million pieces of glass mosaics.Each face will be inscribed with "God is greatest" in Arabic and fitted with thousands of colored lights. The clock will be visible from more than 16 miles (25 kilometers).An observatory deck is planned at the base of the clock.A huge golden crescent moon, 75 feet (23 meters) in diameter, will eventually rise above the clock on a 200 foot (61 meter) spire, from which some 15 beams will shoot up into the sky, the agency added. The entire clock, from the base up to the crescent, itself will be 820 feet (251 meters) high.German and Swiss engineers designed the clock and according to the Ministry of Religious Endowments, the entire project will cost $800 million.The seven tower complex is being built by developer Saudi Binladen Group, the press agency reported.
Advertisement
Subscribe for our daily newsletter