"As a first step it is a great achievement. Now we feel we are part of society, that we contribute," says a female first-time Saudi voter. 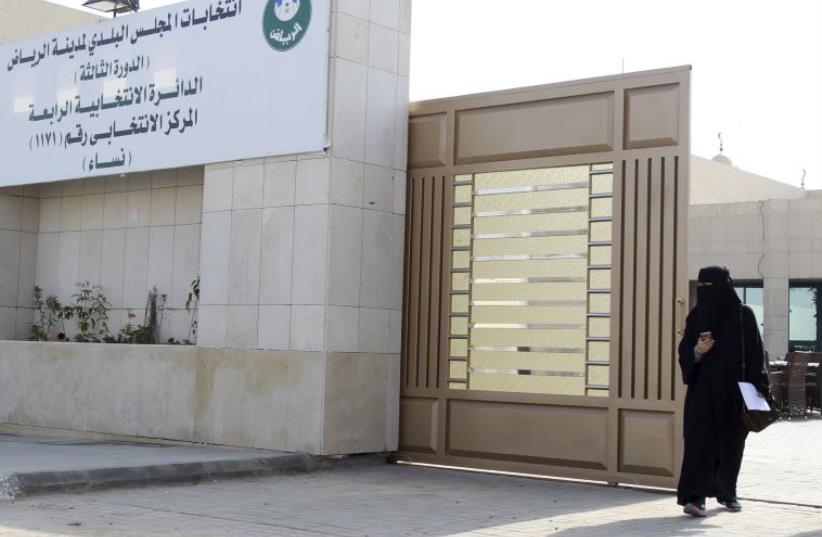 A woman leaves a polling station after casting her vote during municipal elections, in Riyadh, Saudi Arabia December 12, 2015.
(photo credit: REUTERS/FAISAL AL NASSER)
Advertisement
RIYADH- Saudi Arabian women voted for the first time on Saturday in local council elections and also stood as candidates, a step hailed by some activists in the Islamic patriarchy as a historic change, but by others as merely symbolic."As a first step it is a great achievement. Now we feel we are part of society, that we contribute," said Sara Ahmed, 30, a physiotherapist entering a polling station in north Riyadh. "We talk a lot about it, it's a historic day for us."The election, which follows men-only polls in 2005 and 2011, is for two thirds of seats on councils that previously had only advisory powers, but will now have a limited decision making role in local government.This incremental expansion of voting rights has spurred some Saudis to hope the Al Saud ruling family, which appoints the national government, will eventually carry out further reforms to open up the political system.Saudi Arabia is the only country in which women cannot drive and a woman's male "guardian", usually a father, husband, brother or son, can stop her traveling overseas, marrying, working, studying or having some forms of elective surgery. Under King Abdullah, who died in January and who announced in 2011 that women would be able to vote in this election, steps were taken for women to have a bigger public role, sending more of them to university and encouraging female employment.However, while women's suffrage has in many other countries been a transformative moment in the quest for gender equality, its impact in Saudi Arabia is likely to be more limited due to a wider lack of democracy and continued social conservatism.Before Abdullah announced women would take part in this year's elections, the country's Grand Mufti, its most senior religious figure, described women's involvement in politics as "opening the door to evil".The pace of social reform in Saudi Arabia, while ultimately dictated by the Al Saud, is also strongly influenced by a tussle between conservatives and progressives over how the country should marry its religious tradition with modernity.WOMEN'S RIGHTSOnly 1.48 million Saudis from a population of 20 million registered to vote in the election, including 131,000 women, the widespread apathy partly the product of a poll with no political parties, strict laws on campaigning, and in which only local issues are at play.Some voters hope that the Al Saud will eventually allow elections for the advisory parliament, the Shura Council."There is no reason, if this is applied to municipal councils, that they would not apply it to the Shura," said Riyadh Najm, a retired former government official in glasses and a neat grey beard.The Al Saud have not made any announcements to this effect but it is being discussed in private, according to analysts.At the King Salman Social Center in north Riyadh, where men and women went into different parts of the building to cast their ballots, voters of both sexes were greatly outnumbered by both election officials and journalists.Dozens of prospective candidates were barred from running. The authorities gave no reason for not allowing them to participate, but many had previously been politically active, including advocates for women's driving and the advancement of the Shi'ite Muslim minority.Iman al-Mashrawi, a paediatric surgeon in Riyadh, said she had been persuaded to vote by a friend who was running for office. "We are mothers, teachers, doctors. We are everywhere in our country the same as any man," she said.For now, according to some of the women voting on Saturday, apart from the symbolic nature of casting a ballot, their hopes for change resulting from their votes are limited to purely local issues."I believe women want more parks, libraries for their children, health and fitness facilities for women. And just to be part of the decision," said Ahmed, the physiotherapist.As she spoke, a military transport plane flew low overhead from the nearby airbase, a reminder of the momentous policies from war in Yemen to management of plunging oil prices on which Saudi citizens - men and women - still have no formal say.