The unprecedented Saudi move came as a result of growing local criticism of the police and the way it performs its role as the defender of Sharia law in the state. 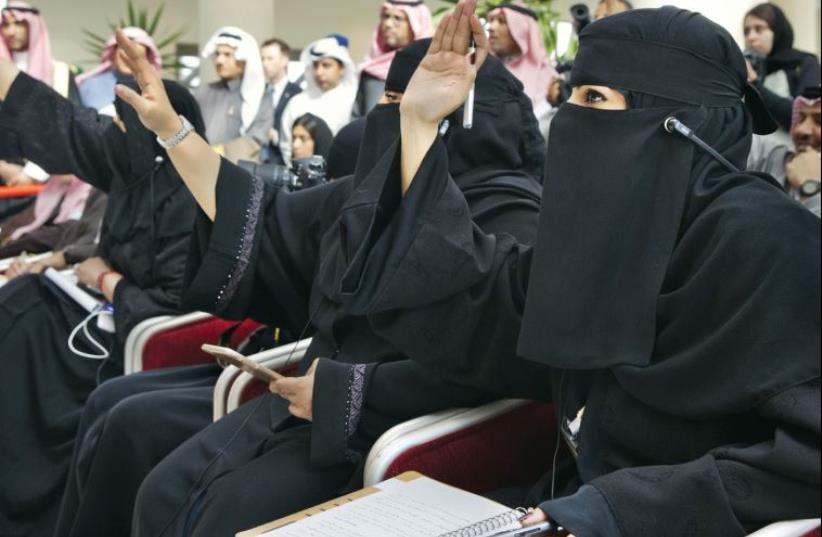 Saudi women journalists raise their hands to ask questions at a press conference held by US Secretary of State John Kerry and Saudi Foreign Minister Adel Jubeir at King Salman Regional Air Base in Riyadh, Saudi Arabia, last month
(photo credit: REUTERS)
Advertisement
The Saudi government issued new regulations for the religious police operating in the state Tuesday, taking away the organization's authority to arrest and persecute citizens for not adhering to Sharia law in their daily lives.The unprecedented Saudi move came as a result of growing local criticism of the police and the way it performs its role as the defender of Sharia law in the state.According to a statement explaining the new regulations, the religious police is "an independent body, which has organizational relations with the prime minister."The government emphasized that the religious police should notify the police or the Anti-Drug Authority of drug use crimes, adding that "neither the members nor the heads of the religious police are allowed to arrest and persecute citizens for such crimes, or even to ask suspected people for their IDs. Only the police and the Anti-Drug Authority are allowed to take these measures."In light of previous violent incidents that involved religious police members who attacked citizens, the governmental statement also included a prohibition on people who were charged with criminal offenses from joining the religious police.The Saudi move aroused contradictory responses on social media networks. While opponents of extremist Islam in the country hailed the government's decision, stating that "it's better late than never," others initiated a social media campaign under the hashtag, "The people against abolishing the role of the religious police." The Saudi government’s controversial decision comes amid an ongoing conflict between liberal Saudis and Salafi Saudis over the religious character of the Kingdom. Salafis view the recent move as evidence that the government is tilting toward the latter camp.