Jordan's King Abdullah and Algerian President Abdelaziz Bouteflika are also among the dignitaries invited to the convening. 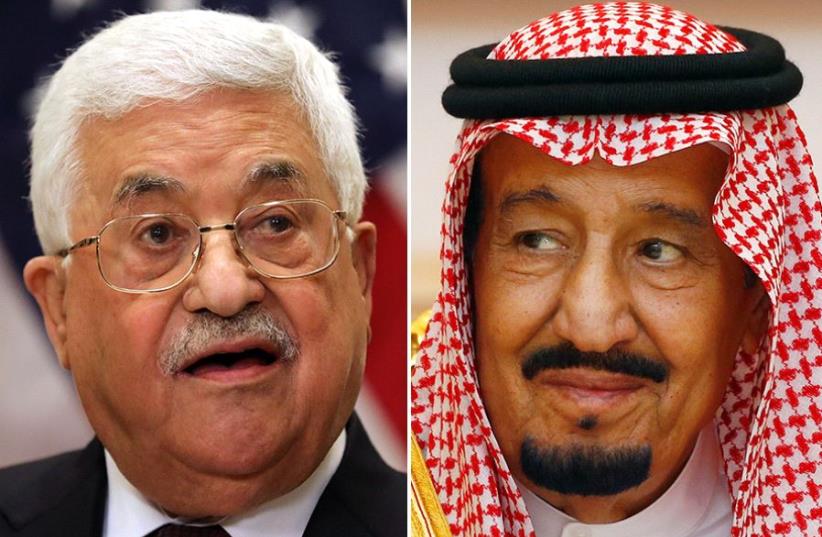 King Salman and Abbas
(photo credit: REUTERS)
Advertisement
Saudi Arabia's King Salman bin Abdulaziz has invited Palestinian Authority President Mahmoud Abbas to a meeting between US President Donald Trump and Muslim leaders in Riyadh later in May, local media reported Wednesday.Jordan's King Abdullah and Algerian President Abdelaziz Bouteflika are also among the dignitaries reportedly invited to the summit taking place during Trump's stop to the Gulf nation as part of his first presidential foreign tour, which also includes visits to Israel and the Vatican.According to the Saudi Press Agency, Saudi embassy representative in Jordan, Tariq bin Mohammed Rashwan, delivered the invitation to Abbas in Amman for the May 20-21 gathering. Abbas was said to have agreed to attend the event.According to regional reports, the Saudi-hosted 'Arab, Islamic and American Summit' was expected to address issues in the Arab and Muslim worlds and open a dialogue about forging new security partnerships. Meanwhile, Abbas was reportedly preparing to meet with Prime Minister Benjamin Netanyahu under the good offices of Trump.Trump is expected to announce such a trilateral summit when he visits Jerusalem and Bethlehem on May 22-23, according to Israeli and Arab media reports. In a press conference in Ramallah on Tuesday Abbas said, “We affirmed to [Trump] that we are ready to cooperate with him and meet the Israeli prime minister under his auspices in order to make peace.”For the last eight years, he has made two primary demands as a precondition for talks; the release of Palestinian prisoner in Israeli jails and a freeze of all West Bank settlement activity and Jewish building in east Jerusalem.Direct talks between Abbas and Netanyahu were rare during the Obama administration.The last substantive meeting between the two leaders took place in 2010.A nine-month, US-brokered peace process that fell apart in 2014 did not include direct Netanyahu-Abbas talks.Netanyahu has persistently called on Abbas to meet with him without preconditions.Tovah Lazaroff contributed to this report.