Talks in Geneva last week ended without a resolution to the conflict, which has claimed more than 2,800 lives. 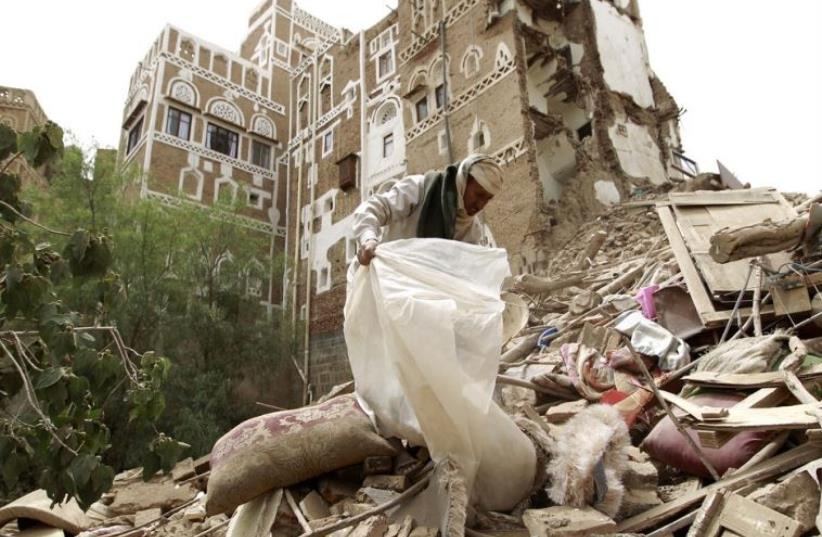 A worker searches through the rubble after Saudi-led strikes targeted the old city of Sanaa, Yemen
(photo credit: MOHAMMED HUWAIS/ AFP PHOTO)
Advertisement
SANAA - Air strikes by Saudi-led forces hit military bases across Yemen on Friday, residents told Reuters, and the country's foreign minister was quoted as saying there was no need to convene another peace summit after the first round of talks failed.Talks in Geneva last week ended without a resolution to the conflict, which has claimed more than 2,800 lives, as the Iran-allied Houthi movement and Saudi-backed President Abd-Rabbu Mansour Hadi refused to back down.Ten people were killed in air raids in Jawf, a northern province bordering Saudi Arabia, residents said. Fighter jets also struck the capital Sanaa, the Houthis' northern stronghold in Saada, as well as the provinces of Marib, Shabwa, Bayda and Aden in the center and south of the country.Hadi's foreign minister Reyad Yassin Abdulla said his government had no interest in organising a new meeting in Geneva, Saudi newspaper Asharq al-Awsat reported on Friday, and would instead work with all parties to implement United Nations Security Council resolution 2216.The Houthis reject that resolution, which calls for them to withdraw from cities under their control, return seized arms and allow Hadi to return from his Riyadh exile.Three months after an Arab coalition began air raids in support of Hadi on March 26, the Houthis and allied military units loyal to former president Ali Abdullah Saleh remain the dominant force on the ground, and have stepped up attacks on Saudi border posts in recent weeks.Houthi fighters fired artillery into Saudi Arabia on Thursday, killing three Saudi soldiers and one from the United Arab Emirates, a member of the coalition.UN special envoy Ismail Ould Cheikh Ahmed will hold talks in Kuwait and Saudi Arabia in the coming days on a draft peace proposal with the aim of reaching a preliminary agreement with Houthi fighters, a UN spokesman said on Friday.In a possible blow for peace hopes, Yemen's Houthi-run state news agency Saba reported that Saudi-led forces had prevented an Omani aircraft with Yemeni delegates returning home from the Geneva peace talks from landing on Friday in Sanaa.The plane, which was also carrying people who had been wounded in recent bomb blasts by Islamic State militants, had to turn back to Muscat, Saba said. The Saudi-led coalition is in control of Yemen's airspace and coastline.Officials from the Saudi-led coalition could not immediately be reached for comment.The United Nations has estimated that more than 21 million people, or 80 percent of the Yemeni population, are in need of humanitarian assistance.The UN Security Council and UN aid chief Stephen O'Brien pressed on Thursday for more aid and commercial access to Yemen, where a near-total blockade by Saudi Arabia has slowed shipments to the Arabian Peninsula country to a trickle.The World Health Organization (WHO) said on Friday it would provide essential medicines for treating non-communicable diseases such as heart and chronic respiratory illnesses for more than one million people in Yemen for six months.