Deputy Crown Prince's remarks about women's right to drive aroused a hot debate between liberals and conservatives in Saudi Arabia. Surprisingly, many women were on the side opposing women's driving. 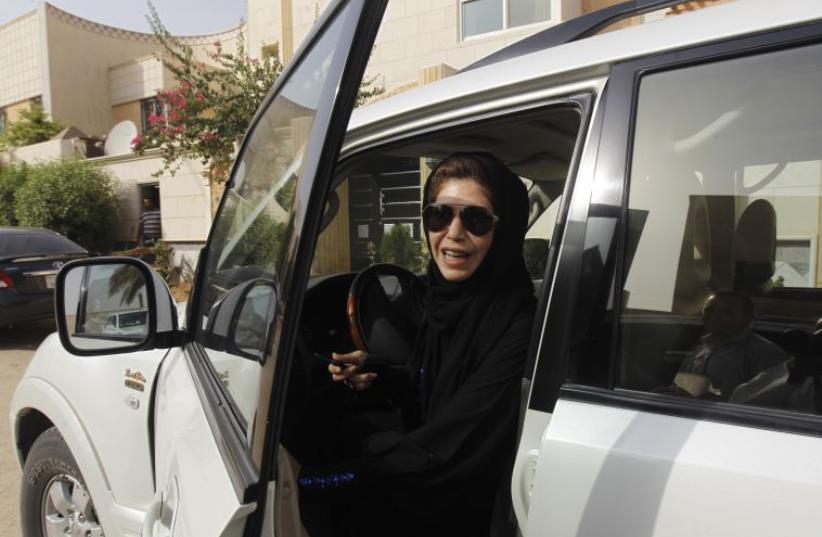 Female driver Azza Al Shmasani alights from her car after driving in defiance of the ban in Riyadh June 22, 2011.
(photo credit: REUTERS)
Advertisement
A fascinating debate over Saudi women's right to drive has been taking place on social media networks since Saudi Deputy Crown Prince Mohammad bin Salman unveiled the Kingdom's long-term plan for economic development Monday evening. Displaying the future vision, titled "Saudi vision 2030," at a press conference, bin Salman underscored the need to increase women's participation in the workforce. When asked whether this move would be followed by the state permitting women in the Kingdom to drive cars, he answered that the society, not the government, will decide whether to allow women to drive cars."This issue is definitely related to the will of the society. Today, the society opposes women driving, believing it has negative repercussions, and we cannot coercively impose on it something it opposes," bin Salman said.Saudi Arabia has no formal ban on women driving. But as citizens must use only Saudi-issued licences in the country, and as these are issued only to men, women drivers are anathema.The prince's remarks aroused hot debate on social media networks, stoking tensions between liberals and conservatives in Saudi Arabia. The liberals launched a social media campaign under the hashtag "the society supports women's driving," calling on the government to allow women to drive cars."How do you want to change the country while imposing restrictions on half of the society? How long? Do you think that the society will change by itself? A decision is needed in order to change the society," a Saudi woman stated.Other champions of women's right to drive explained that the current situation, in which Saudi women have to drive alone with a hired driver, is religiously prohibited.  "Women should serve as the driver of their family, so they would not need a strange driver whom they do not trust, which is forbidden by the religion," a Saudi woman wrote.Shedding light on the irony of the entire debate, another woman argued: "The patriarchal society is the one to decide if you are allowed to drive. You (Saudi woman) do not have the right to decide on your own."Saudi conservatives launched an opposing campaign, titled "The society opposes women's driving." This campaign was surprisingly led by women who urged the government to pave the way for the participation of women in more meaningful arenas. "I am a Saudi woman and I am against allowing women to drive cars. The government should fight for women to receive much more important rights, such as employment rights. The government should open more fields to women's employment," Jaffa, a Saudi woman, said.Ameer, a religious Saudi conservative, commented: "women's driving might endanger women themselves, since they might suffer from sexual harassment."Another Saudi woman cynically said: "If I would drive, I would have additional responsibilities to worry about. Saudi women might ask the men to help us in giving birth and taking care of the children."