Qatar's education ministry tweeted on Monday that the book was found to ''carry content that conflicted with Qatar's foreign policy.'' 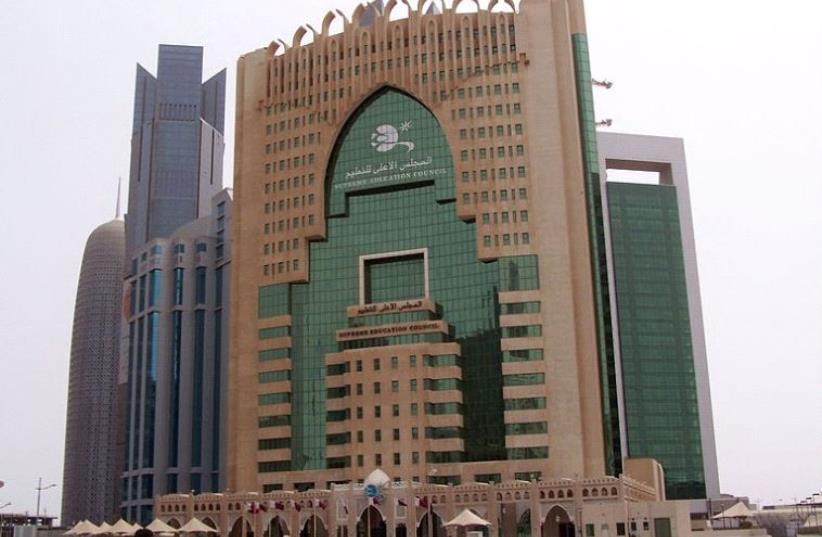 Qatar Supreme Education Council building
(photo credit: Wikimedia Commons)
Advertisement
A history textbook that describes Palestinians who hijacked planes in 1970 as terrorists has stirred anger in Qatar and Bahrain, prompting government interventions to stop its use in private schools.Oxford University Press describes the book, Technology, War and Independence, 1901-Present Day, by Aaron Wilkes, as “gripping and truly memorable history to inspire your young historians.”But its use this academic year by ninth graders in the International School of Choueifat in Doha touched off social media denunciations in Qatar, which prompted the government to send a team to the school on Monday, according to the Doha News website. The school is part of an international network of educational institutions that traces its origins to Choueifat, Lebanon and in the 1970s began to spread across the region.Qatar’s education ministry tweeted on Monday that the book was found to “carry content that conflicted with Qatar’s foreign policy.”“The school was issued a firm warning, copies of the book were withdrawn and students were refunded fees paid for this book,” the ministry added. “The school was also instructed that it is imperative that the ministries approval be obtained before any book can be taught.”Speaking to Doha News, school officials said the book had actually been withdrawn last week “immediately upon identification of certain inappropriate content.”What raised the ire of the social media users was a description, under the heading “What is Terrorism?” The book details the Popular Front for the Liberation of Palestine’s hijackings that shocked the world and triggered King Hussein’s crackdown against the PLO in September 1970. “Palestinian terrorists took over several airliners in 1970 including two American, one Swiss and one British. They targeted American planes because they felt the USA always helped out Israel, a country that occupies land the Palestinians claim as their own. They wanted their own country – Palestine – and wanted land that Israel occupies. Terrorist acts continue today in this area of the Middle East.”Another section of the book on “How do terrorists attack?” that lists one of the means as suicide bombs also evoked anger. “Explosives are attached to the bomber’s body,” the book says. “They approach the target and explode the bomb. Palestinian terrorists are well known for this.”School principal Joseph Salameh said the inclusion of the book in the curriculum was an “oversight” that “slipped through the net in spite of our rigorous system of screening new books.” He said that Sabis, the international education organization that oversees the school network, “will be scrutinizing its screening system in order to avoid such mistakes in the future.”Meanwhile, a ninth grade textbook used at the International School of Choueifat in Bahrain also “stirred the rancor of the citizens,” according to a report on the website of Bahrain’s al-Watan newspaper on Tuesday.The report did not name the textbook, but al-Watan wrote that the book “considered Palestinians to be terrorists.” Like in Qatar, education officials responded to a social media outcry by visiting the school. “The Ministry of Education obliged the school to withdraw the book which hadn’t been submitted for approval,” al-Watan reported, adding that the book “includes subjects that contradict the general policy of the kingdom of Bahrain.”Withdrawal of the book came days after Doha College, one of the oldest British curriculum schools in Qatar, came under criticism after it included Israel in a display of world flags. The flag was removed. Principal Steffen Sommer told Doha News that it was “an error of judgment” to include the flag. Qatar’s Ministry of Education waded into this fray as well, with officials saying that “Israel’s flag was displayed as a mistake and it was taken down.”Israel and Qatar have no formal relations and Qatari public opinion identifies strongly with the Palestinians. At times, Israeli athletes compete in events hosted by Qatar. In 2013, the Israeli flag was removed during the International Swimming Federation World Cup in Doha after residents complained about it, according to Doha News. In 2014, the Israeli flag was flown.Two Israeli beach volleyball players participated in a tournament in Doha in April.