Ahmad Dawabsha was hospitalized at the Tel HaShomer Medical Center in Tel Aviv this week following a deterioration in his health. 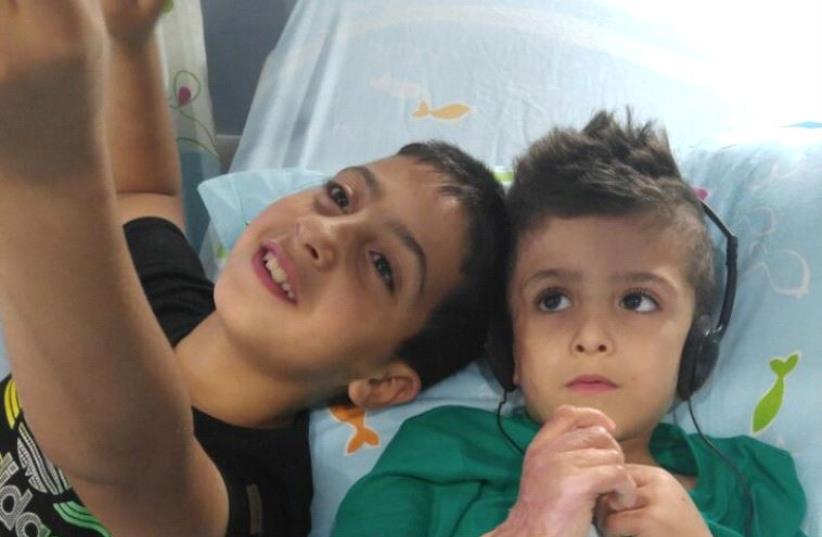 Ahmad Dawabsha at Shebaa Hospital with cousin
(photo credit: NASR DAWABSHA)
Advertisement
Six-year-old Ahmed Dawabsha, the lone survivor of the Duma firebombing, who had only just returned to his village less than three weeks ago after a yearlong hospitalization, was readmitted to the hospital this week after his health deteriorated.According to his uncle, Nasr Dawabsha, arrived at Sheba Medical Center, Tel Hashomer, Monday for a routine checkup and to replace the protective vest he wears over his burn scars.However, after Ahmed began experiencing fever symptoms and vomiting on Tuesday, his family brought him back to the hospital for additional examinations.Doctors discovered that Ahmed’s intestines and burn scars were inflamed and admitted him to the hospital.“My family and I are nervous about Ahmed, but we are also optimistic because Ahmed is receiving excellent treatment,” his uncle said. “We hope his health improves soon.”Nasr, who was not sure whether Ahmed’s current illness is connected to the burn wounds, said Ahmed will be hospitalized for a minimum of four days.Sheba’s spokeswoman declined to comment to protect Ahmed’s privacy.