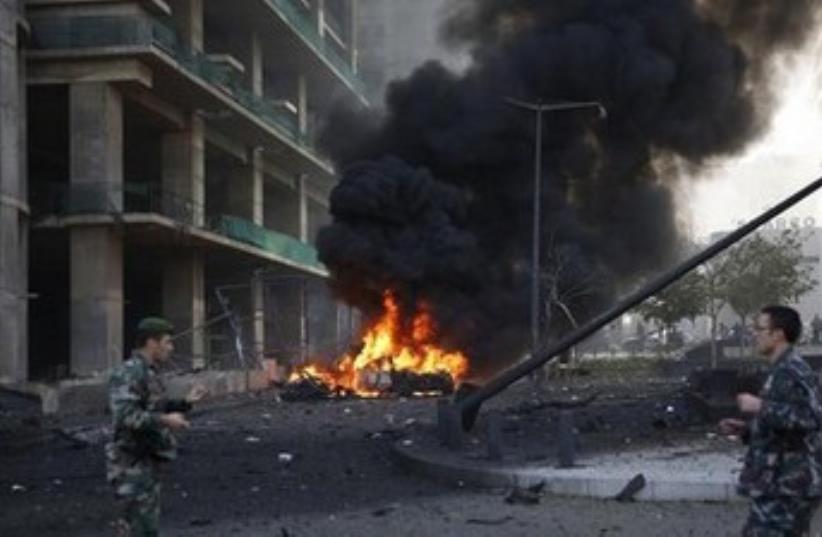 Beirut blast, December 27, 2013_3
(photo credit: REUTERS/Steve Crisp)
Advertisement
A suicide bomber killed two Lebanese soldiers with a car bomb near an army checkpoint in a Hezbollah stronghold in northeast Lebanon on Saturday, security sources said.The latest bombing, in a country destabilized by the civil war in neighboring Syria, was the third such attack in recent weeks in Hermel, a predominantly Shi'ite Muslim area near the border with Syria. Fifteen people were wounded.It followed a suicide attack in Beirut on Wednesday targeting the Iranian cultural center. A radical Sunni group, the Abdullah Azzam Brigades, said it had carried out that bombing, which killed eight people, as a reprisal for the military involvement of Hezbollah and Iran in the Syrian war.There was no immediate claim of responsibility for Saturday's attack. The bomb was set off when soldiers at the checkpoint became suspicious of the man in the vehicle, a Jeep Grand Cherokee, the sources said.Hezbollah, an Iranian-backed political and military movement, is fighting alongside President Bashar Assad's forces against predominantly Sunni Muslim rebels in a conflict that has exacerbated sectarian tensions in Lebanon.Assad is a member of the Alawite sect, an offshoot of Shi'ite Islam.Security is one of the main challenges facing a new Lebanese government that took office a week ago after the country went for nearly a year without a cabinet because of political tensions fuelled by the Syria conflict.Prime Minister Tammam Salam, the highest-ranking Sunni Muslim in the administration, condemned Saturday's attack as an act of terrorism. He called for "solidarity in confronting terrorism in all its forms".The security forces cordoned off the area after the blast.Hezbollah is a long-standing ally of Damascus. It says it is fighting in Syria to prevent Sunni radicalism from spreading to Lebanon. Its Lebanese critics say it must pull out, saying Hezbollah's role in Syria is provoking such attacks.