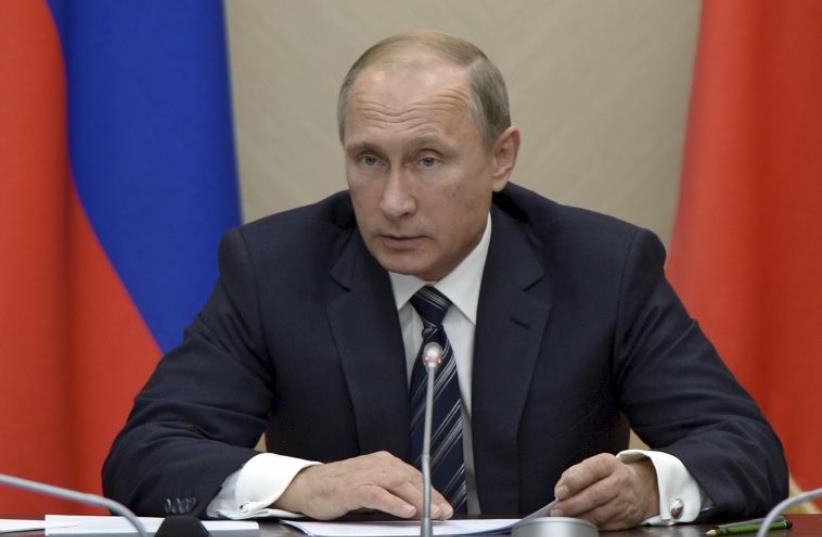 Russian President Vladimir Putin chairs a meeting with members of the government at the Novo-Ogaryovo state residence outside Moscow
(photo credit: REUTERS)
Advertisement
Russian President Vladimir Putin said Syria needs to start working on a new constitution as a first step to finding a political solution to its civil war, though he acknowledged the process was likely to be difficult.Putin, who has thrown Russia's support behind Syrian President Bashar al-Assad with air strikes, also said in an interview with the German newspaper Bild that the crisis in relations between regional rivals Saudi Arabia and Iran would complicate the search for peace in Syria."I believe it's necessary to move towards constitutional reform (in Syria). It's a complicated process, of course. And after that, on the basis of the new constitution, (Syria should) hold early presidential and parliamentary elections," Putin said in the interview which was conducted on Jan. 5.Putin, obliquely referring to diplomatic pressure from the United States and France to concentrate Moscow's firepower on Islamic State militants, said Russian military aid was going to help parts of the Syrian opposition in the fight against IS as well as to help Assad."You are talking about Assad as our ally. Do you know that we are backing the actions of the armed opposition combating Islamic State? ... We are coordinating our joint actions with them and support their offensive operations on different parts of the front with strikes by our air force.""I am talking about hundreds, thousands of armed people, who combat Islamic State ... Some of them have already spoken about it in public, others prefer keeping silent but the work is going on."Putin made similar comments last year, but Russian officials subsequently denied that Moscow provided military aid to the Syrian opposition groups that Putin had mentioned.In the interview with Bild, Putin said the row between Saudi Arabia and Iran over Riyadh's execution of a Shi'ite Muslim cleric on Jan. 2 would complicate attempts to reach a solution to the Syrian conflict."If our participation were needed, we would be ready to do everything for the conflict to be resolved, and as soon as possible," he said, according to a transcript of the interview, sent to media by the Kremlin press office.