Syria prepares for offensive against ISIS in Palestinian camp of Yarmouk

Area in Damascus has been under siege for four years with over 140,000 civilians displaced in fighting. 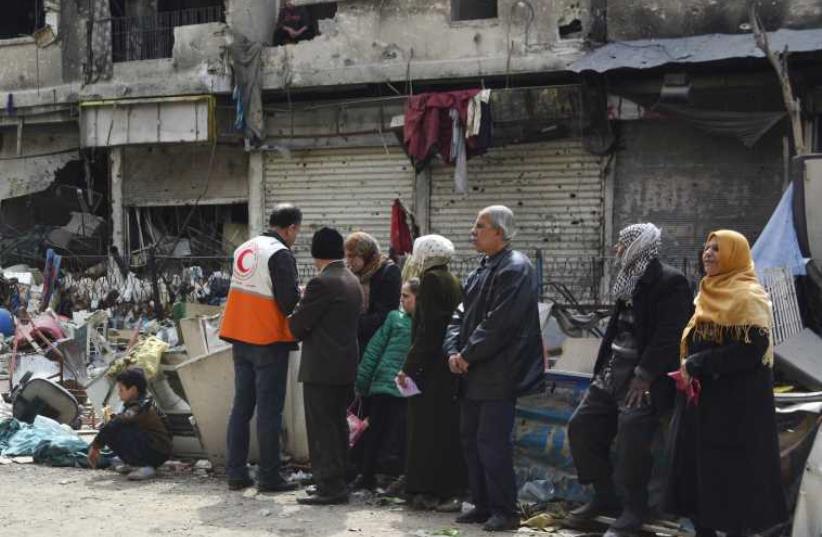 Yarmouk refugee camp
(photo credit: REUTERS)
Advertisement
The Syrian regime is massing troops and armored vehicles to prepare to retake from Islamic State the Yarmouk area in southern Damascus, according to local sources and media.Yarmouk was home to large numbers of Palestinian refugees before the country’s civil war, but has been under siege by the Syrian regime for many years.According to Al-Masdar News, the Syrian Army has been concentrating forces near Yarmouk in southern Damascus after the regime successfully defeated the rebels in eastern Ghouta.As part of its campaign in eastern Ghouta, the regime of Bashar Assad allegedly used chemical weapons against Syrian rebels, which resulted in air strikes by the US, UK and France on Saturday. However, the strikes didn’t stop the rebels from leaving eastern Ghouta under an agreement with Damascus that saw them bused to the north of the country.Now the regime has set its eyes on Yarmouk.A recent uptick in violence, including exchanges of rocket fire have been reported. According to the recent reports, the Syrian Army has sent its 9th Armored Division, Tiger Forces and Palestinian units that support Assad to help retake Yarmouk.Yarmouk was once home to 160,000 Palestinians, many of whom were the descendants of refugees. It had a lively economy and local culture before the Syrian civil war erupted in 2011. After years of battles, an estimated 140,000 Palestinians were displaced by the fighting, according to the United Nations Relief and Works Agency for Palestine Refugees (UNRWA).Around 18,000 Palestinians have remained in Yarmouk, where they have faced conditions bordering on starvation, according to reports.In 2015, Islamic State took over 60% of Yarmouk and has held it ever since, under a state of siege by the regime. There is also a small pocket of Syrian rebel fighters next to the ISIS held area.According to the Arabic media site thmnia.com, a spokesman for UNRWA had issued a statement of concern about the situation in the Yarmouk camp and that it was following the security situation closely. However, in an email to The Jerusalem Post, an UNRWA spokesman denied that a statement had been issued.The fate of Yarmouk has made headlines several times over the years. One of the former Palestinian residents, Aeham Ahmad, recently wrote a book called The Pianist of Yarmouk. ISIS burned Ahmad’s piano in 2015 and he fled to Europe, making the perilous sea journey, eventually securing asylum in Germany.The Action Group for Palestinians estimates that 3,685 Palestinians have been killed in the Syrian conflict and 85,000 have fled the country.According to several pro-regime Twitter accounts, the assault on Yarmouk will be led by veteran Syrian soldiers from elite units such as the 42nd Brigade of the 4th Mechanized Division, that have played a part in other campaigns against rebel enclaves in recent months. They will also include a group of Palestinians from the Jerusalem Brigade (Liwa al-Quds) which includes Palestinians allied with the Popular Front for the Liberation of Palestine (PFLP).Alwatan, a Syrian media website, included a statement from the director of the political department of the Palestinian Liberation Organization, Anwar Abdel Hadi, giving a “last warning” to extremists in Yarmouk. According to the statement, the Syrian regime would likely move against ISIS in the coming days and has sought not to harm civilians. It called on the “militants” to resolve the situation and leave.